Russian company "Ruzkom" will no longer be able to produce food products under the Nashe brand. This is the decision of the FAS (Federal Antimonopoly Service of Russia). The reason is that customers confuse pates and other products of the Nashe brand with a well-known Czech food brand. "Hame", the logo of both brands is almost identical, such similarity misleads buyers. 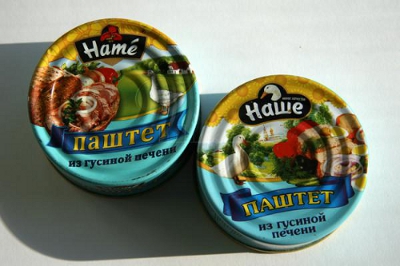 Litigation between the two companies has been going on for a year and a half. "Hame" to the Russian manufacturer was rejected by the courts in order to return to consideration after cassation complaints. The legal battle is still not over, but the withdrawal of the FAS will be an exceptionally strong argument in favor of the Czech company.

The pâté manufacturer Nashe is accused of violating antimonopoly laws and unfair competition. To confirm this conclusion, the FAS conducted a sociological survey designed to compare the perception of two brands of food products by consumers. The survey showed that 68-70% respondents found the brands to be so similar that customers confuse them, considering them to be the same product or variations of the same brand.