Company peek inc., a maker of e-mail readers and, in some cases, social networking devices, plans to partner with low-cost mobile phone manufacturers to create low-cost smartphones for emerging markets.

Cheap phones from Asian manufacturers will be equipped with software from Peek. software from Peek compatible with the BREW platform from Qualcomm and works with inexpensive chips MediaTek, which will set the cost of such phones at around $50. In addition, phones of this type will be more economical and will be able to work even in areas with poor coverage. 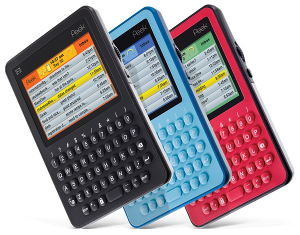 The company has already sold over 50,000 of its devices. Peek and is now looking for ways to further develop. It is assumed that such a move will allow the company to win in the long run and ensure its profitability over a long period. The company has already invested about 20 million US dollars in new developments. Plans include integration of software from Peek not only with inexpensive smartphones, but also, perhaps, with photo frames, cameras, tablets, radios, MP3 players and other devices.
Total
0
Shares
Share 0
Tweet 0
Pin it 0