The face of a new advertising company Pepsi Diet will be one of the most desirable and attractive women in the world - Sofia Vergara (Sofía Vergara). This is not the first collaboration of the Colombian actress and model with PepsiCo.

Moreover, it is from the advertising company Pepsi Sophia's career began. This was in 1996 and the commercial was playing in most of Latin America. After a successful debut in advertising, the aspiring model worked as a TV presenter and starred in other commercials. Her film career began in 2002 with a supporting role in the Hollywood film Big Trouble. 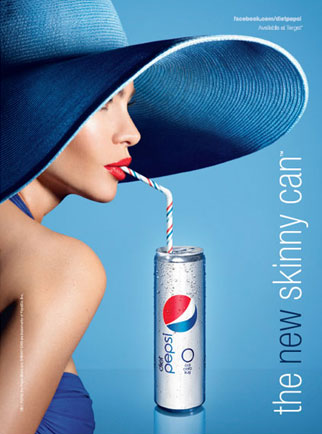 Sophia managed to win the third place in the list of the most desirable women in 2011. The competition was held by the popular Internet resource AskMen.com.

First advert to appear Pepsi Diet has already come under some criticism. Due to the fact that the huge hat almost completely hides the face of the model, which is why it is not easy to recognize her.

By the way, the new drink cans now have a different shape - they are narrower and taller, which, according to the designers, should suggest slimness.