Peugeot invests millions of dollars in an ambitious new brand strategy Mu (read "Mu"). More precisely, Mu is a fast car rental program in major European cities. As part of the new strategy, it is planned to strengthen the presence of the brand Peugeot in metropolitan areas.

Clients Mu be able to rent vehicles Peugeotincluding bikes, scooters, cars and vans using prepaid cards (purchased online). It is believed that the new strategy will inspire customers to buy the company's products.

Peugeot piloted the scheme in four French cities, including Lyon and Nantes. This week, the largest project to date starts in Paris. By the end of this year, the company expects to launch the service in other European capitals. 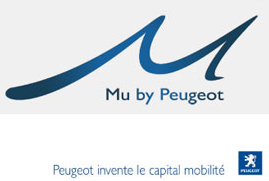 Mu uses the same payment model as the service street car. The scheme has been operating in the UK since 2004 and is run by the UK's largest car club with 70,000 members in seven cities.

At the beginning of the current month Peugeot presented an updated visual image of the company, as well as a new marketing strategy. By 2015, it is planned to promote the brand from 10th to 7th place in the ranking of world car sales.

The traditional logo with a lion has become more voluminous, advertising campaigns will be carried out under the slogan "Motion and emotion" (Movement and emotions). This also applies to the current campaign from the agency. BETC Euro RSCGorganized in honor of the 200th anniversary Peugeot.

Last year, a new visual image was presented by a related Peugeot brand Citroen. However, it was created on the basis of the old "two chevrons" logo. Tagline - "Creative technologies".