Under this brand, the Dutch company Philips (or rather, its subdivision Philips Domestic Appliances and Personal Care unit of Philips) once made electric shavers, trimmers, epilators and clippers.

The history of Philishave began in 1939 thanks to the engineer Alexander Horowitz, whose efforts created an electric razor with rotating blades. Prior to this, all such designs had knives with reciprocating movements.

Management liked the device Philips, it was decided to start its mass production. Which was done in the same 1939 in the Dutch city of Eindhoven (Eindhoven, Netherlands). However, only a small batch was produced, as the Second World War began. 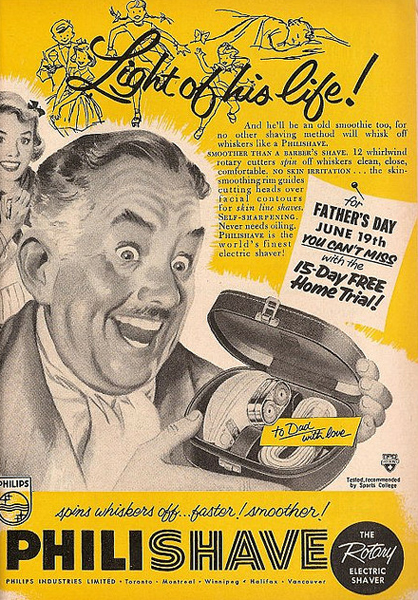 However, as soon as the hostilities ended, the company again returned to the idea of \u200b\u200bproducing electric shavers of a new system. In the beginning, a cigar-shaped model with a single knife was created. Then, in 1948, a more interesting design appeared - a rounded ergonomic shape, but still with a single knife. The American industrial designer Raymond Loewy, well-known in those years, worked on the design of this razor.

The entry into the international market took place in 1952. By that time, models with two knives had already been developed, which were more convenient to use and provided a much better result.

The model with three heads appeared in 1956. However, the company was in no hurry to bring it to the international market and preferred to get by with only Australia and New Zealand for a start. In other countries, this electric shaver began to be supplied in 1960.

For a long time, the company produced electric shavers under the brand Philishave, which became famous almost all over the world, with the exception of the USA, where the brand was used Norelco. However, in 2006, it was decided to abandon these brands and continue to further produce electric shavers exclusively under the brand Philips. At the same time, in the USA, for some time, products were produced as Philips Norelco.