As students at Wichita State University (Wichita, Kansas), brothers Dan and Frank Carney (Dan and Frank Carney) thought not only about their studies, but also about their own business. History is silent about why they chose the pizzeria. Perhaps due to the fact that this dish was little known in those places. Having borrowed 600 dollars from their mother (quite good money at that time), they rented a small local restaurant for 25 people. A tiny sign above the door allowed for no more than nine letters, which limited the name. However, it took very little time to come up with it - the old room most of all begs for comparison with a hut or shack ("hut" in English). That's how I was born Pizza Hut. The restaurant opened on June 15, 1958. Within a few months, he was bringing in 500-800 dollars a week. The brothers realized that they had stumbled upon a gold mine and began to open new restaurants under the same brand. By the way, at first, new restaurants stylized themselves as that very tiny first room-hut (and even now this is typical for many of them, especially in the USA). Already in 1959, it became possible to open establishments on the basis of a franchise. In 1968, a significant event takes place - the first restaurant opens outside the United States, in Canada. Since 1971 the company Pizza Hut is considered the "number one pizza" maker and trendsetter in the pizza world. Today, the network covers hundreds of countries around the world. 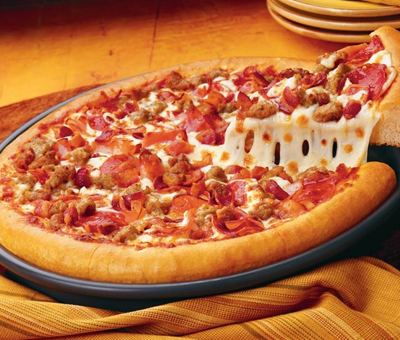 Since 1972 Pizza Hut becomes a public company. And in 1978 it is absorbed by the company PepsiCo, which is also the owner of such "fast food brands" as Taco Bell и KFC.

One of the main advantages of these "huts" was appeared in 1986 in Pizza Hut delivery, which greatly contributed to the popularity of the brand. It is now that everyone delivers pizza, and in those years this way of serving customers became an innovative novelty. By the way, in the same 1986, an anniversary event took place - the 5000th restaurant was opened Pizza Hut; it was in Dallas, Texas (Dallas, Texas).

Proposed Pizza Hut The menu is varied enough for a fast food restaurant. At the same time, there are two types of restaurants - the family type Pizza Hut, more comfortable, large and with a rich menu, as well as Pizza Hut Express, which is fast food in its purest form.