Recently we already wrote that the company R.I.M. is in full swing developing a tablet computer under the brand blackberry. But then it was nothing more than rumors, not confirmed by any images or characteristics. And here is more information.

An official statement from the manufacturer appeared on the Web, from which many details became known. The new tablet will be named play book (somehow a little frivolous for a company that became famous for the release of business-oriented smartphones). There are no serious differences in design from the models of other companies. However, it is difficult for designers to turn around in this field. 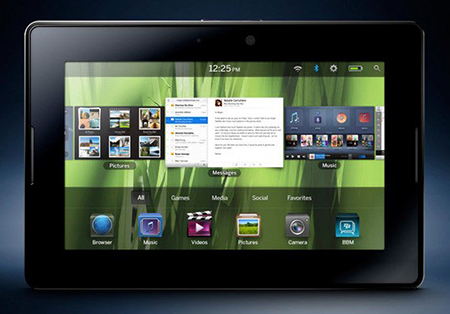 The device will operate under its own operating system, which is called BlackBerry Tablet OS. It is known that it is based on some developments of the company QNX, known for its real-time operating system of the same name. Tablet OS supports HTML5, Flash and OpenGL. The development environment is already ready.

As for the technical component, it is able to please even very fastidious users. The screen with a diagonal of 7 inches has a resolution of 1024x600 pixels. The novelty is based on the Cortex A9 processor with a frequency of 1 GHz. The amount of RAM is 1 GB, permanent - 16 or 32 GB, at the user's choice. The novelty is equipped with microUSB and HDMI ports, and from the wireless modules there are Wi-Fi and Bluetooth (optionally, a 3G modem can be installed). play book can please its owner with the presence of two cameras at once: a 3-megapixel front camera and a 5-megapixel rear camera capable of shooting 1080p video. All this was squeezed into a body weighing 400 grams.

When the novelty will appear on sale has not yet been reported. But this should be expected in the near future.