Playboy is a worldwide magazine for men. Not everyone knows (often even regular readers and subscribers of the magazine are pleasantly surprised), but Playboy is not only about photographs of naked and semi-naked women, the magazine also contains literary works, interviews with celebrities, articles on a variety of topics.

The world's most famous men's magazine was founded in 1953 by then 27-year-old Hugh Marston Hefner. The company was then called HMH Publishing Co. Hugh Hefner became the face Playboy for many years and even today, already at a fairly advanced age, Hefner is still inseparable from his magazine and is an integral part of the brand. This fact is perfectly confirmed by the fact that in any negotiations on the possible sale of Playboy, a special clause stipulates that Hugh Hefner under any circumstances will remain the public representative of the company. Hugh Hefner brought himself and $1,000 borrowed from his mother into the company, and the mother of fellow founder Eldon Sellers indirectly brought one of its most important ingredients, the name, to the company. She worked as a secretary for the Playboy Automobile Company, whose name so well caught the eye of the magazine's founders during the search for a name for their offspring. The first name of the magazine sounded like Stag Party (“bachelor party” / “bachelor party”), but the magazine with the name “Stag” (“Bachelor”) already existed and then the name was coined Playboy. 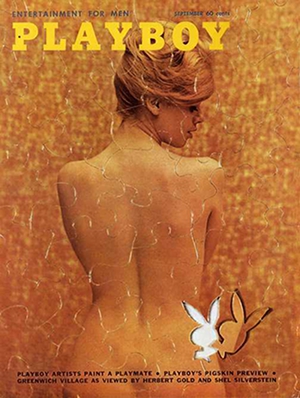 The first issue of the magazine warmed the readers in the cold December of 1953; there was no date or number on it - no one was sure that the second, third and subsequent issues would appear. Moreover, Hugh Hefner was so unsure of the success of the enterprise that his name was not mentioned even once in the first issue, in case of failure, his reputation would not have been tarnished. But the first issue was a success, selling 54,175 copies at a price of 50 cents. Success in many ways, if not all, contributed to the photograph of Marilyn Monroe, which was originally taken for the calendar.

logo Playboy became a rabbit, known for its love of love, its stylized image was created by art director of the magazine Arthur Paul (Arthur Paul). The rabbit appeared in the second issue of the magazine and since then adorns all products under the brand. Playboy. In the 1960s, the bunny developed a habit of hiding among the cover elements, readers could practice their ability to look for the bunny before opening the magazine and reading exciting interviews or fiction.

From 1988 to 2008, the company was headed by Hugh Hefner's daughter, Christie Hefner. Today Playboy Enterprises Inc. is a joint-stock company and is engaged not only and even not so much in the release of a magazine, but in the production of various products for the entertainment industry: television, radio programs, films, printed materials, websites and other content for an adult audience, and an important part of the company's income is income from the provision of licenses on brand use Playboy.