Once you pop, the fun don't stop is the company's slogan, which in the Russian version sounds like "Having tried once, I eat now."

Pringles cannot be called chips in the traditional sense of the word, because it contains less than half of the potatoes (40%), and flour and starch make up the majority. It is more correct to call such a product rather a light potato snack or a crispy cookie. I must say that thanks to the combined composition of the company, for a long time it was possible to leave at an increased tax (in the UK it is quite expensive to produce chips). However, in 1994 the law was corrected, and now Pringles have to pay the maximum, like everyone else. 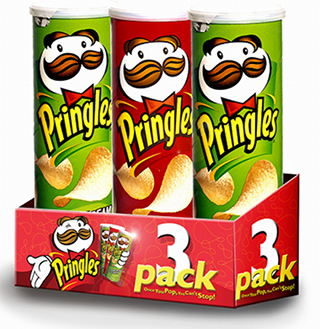 History of the Pringles brand

These potato chips first appeared on the market in 1968 under the name Pringle's Newfangled Potato Chips. The recipe was developed by the chemist Alexander Liepa, who constantly improved it. There are a lot of interesting facts in the half-century history of the brand, the first of which is the origin of the product name. According to the official version, the chips owe their name to one of the streets of the city of Cincinnati - Pringle Drive. It is believed that employees, exhausted by the endless search, borrowed information from the telephone directory that came to hand. Another theory says that the trademark is named after the man who in 1937 proposed an innovative way to process potatoes - Mark Pringle.

The history of the packaging, which has become the trademark of the brand, is also interesting and informative. It was developed by an employee of the company Frederik Bohr in 1970. A practical tube with a memorable design is one of the main components of the success of Pringles chips, as it has a lot of advantages. Firstly, the products are compactly packed, which allows you to transport large volumes. Secondly, the chips retain their shape and do not crumble, and it is more convenient to get them out than from a soft pack. Thirdly, the configuration of potato slices, adapted just for packaging, does not allow them to scatter from the wind (that is, chips scattered on the bedspread during a picnic will not fly away anywhere).

Among the interesting facts about the brand and packaging, one cannot fail to mention the will of Frederic Bohr. He was so proud of his development that he ordered himself to be cremated after death and placed in the same tube with the company logo. The last will of the creator of the legendary packaging, of course, was fulfilled.

Since its inception, the trademark has been owned by Procter & Gamble, and in 2011 Diamond Foods Inc. wanted to buy it. However, the deal did not take place, and the Pringles brand changed ownership only a year later, when it was bought out by Kellogg's.

By the way, the packaging depicts Julius Pringles, he is a chef by profession.