One of the largest Russian brands of dairy products.

History Prostokvashino started in 2002 when an agreement was reached between Unimilk and writer Eduard Uspensky. The company obtained the rights to use cartoon characters on its products. In the future, the writer with a share of humor said that he immediately appreciated the capabilities of the brand and bargained desperately. As you can see, his intuition did not disappoint. Information about the terms of the deal could not be found.

Initially, in 2003, products Prostokvashino produced at the factory "Petmol"that in St. Petersburg. In 2004, all factories belonging to Unimilk. Initially, the products were produced under the brand "From Prostokvashino". These were yogurts, kefir and sour cream.

In 2009 the brand Prostokvashino received the prestigious BRAND OF THE YEAR/EFFIE award. In 2010, he entered the top ten largest Russian consumer brands (according to the magazine Forbes). There are other awards as well. 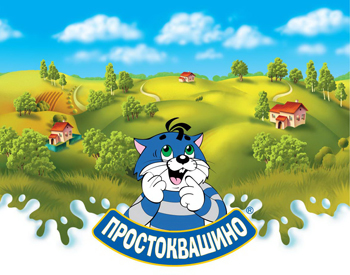 Such results were achieved thanks to a serious rebranding that was carried out Unimilk in 2008, together with a branding agency DEPOT WPF. The decision to do so was taken a year earlier when the company's management decided to promote Prostokvashino at the national level. The brand changed its logo - Matroskin was chosen not only as the most charming character, but also because he constantly fiddled with a cow for fresh milk. The package design has also changed, its positioning on the market has been radically revised.

As part of the new positioning of the brand, a wide advertising campaign was produced, the videos for which were created by the Ukrainian agency Maxima Kiev. As a result of all these actions, in less than a year, the brand became a leader. Products under this brand are sold not only in Russia, but also in some CIS countries - Ukraine, Belarus, Kazakhstan.

Prostokvashino can be called the largest Russian "cartoon" brand in this category.