Company Puma, a German manufacturer of sports shoes and equipment, is one of the world leaders in its industry. The company was founded on October 1, 1948 by Rudolf Dassler. The original name of the company was Ruda, from RUdolf DAssler, but later it was decided to replace it with a more harmonious Puma, which also evokes associations close to sports with fast and agile cougars.

Creation Puma Schuhfabrik Rudolf Dassler preceded by a series of events, details of which can be found in the article Puma vs Adidas. Created by two brothers Adolf Dassler and Rudolf Dassler, a family business – Dassler brothers shoe factory successfully developed, but the events of the Second World War and the increased tension in relations between the brothers led to a major quarrel and, as a result, to a split in the company, which turned into two competing firms, brands familiar to us today - Puma и Adidas. head Adidas became Adi Dassler, and Puma became the property of Rudolf Dassler. Both companies are still headquartered in the small German town of Herzogenaurach.

The first success of the company was brought by developments in the field of footwear for football players. Branded boots ATOM, and subsequently SUPERATOM won the recognition of the players. Puma actively cooperated with German football teams, not only creating new shoes, but also investing a lot of money in this cooperation, considering it as excellent advertising. For many years, the market leaders in sports shoes and clothing - Puma и Adidas competed with each other, acting as sponsors and equipping sports teams, the victory of a team or an individual athlete was considered prestigious for the sponsor. and also brought a significant contribution to the reputation of the brand. The main battles unfolded and are unfolding to this day in the field of football. For Puma one of the most significant victories was the victory of the Italian team at the 2006 FIFA World Cup. For the first time after many years of failure, a team equipped Puma, won such an important competition.

The brand logo has hardly changed since the company was founded. The jumping cougar was only slightly modernized in 1967, thanks to the work of the German cartoonist Lutz Backes.

Initially, the main product of the company was sports shoes. But the range gradually expanded and now under the brand Puma not only clothes and shoes for sports are produced, but also various sports equipment, accessories and even perfumes. And in early 2010, Sagem even released a mobile phone under the brand Puma. 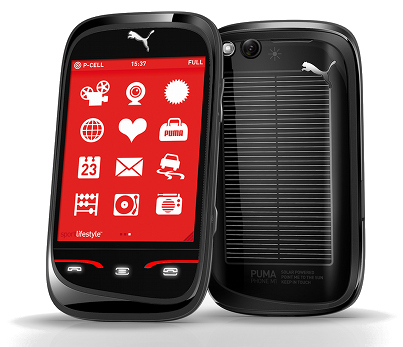 Today Puma is a joint-stock company, the main part of whose shares is owned by a French concern PPR, which specializes in retail sales and well-known brands.

Recognizable logo Puma - the silhouette of the cougar in the classic jump was once changed. In January 2010, the silhouette of the African continent appeared in place of the big cat of the year - a new variation of the logo was presented at the Africa Cup of Nations. This gesture was due to Puma has sponsored 12 African football teams and aims to show respect and support for the African sports movement. 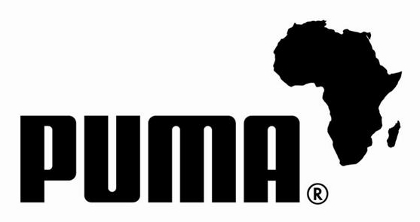 In general, this logo is so famous that it simply could not help but serve as the basis for many of the most various playful imitations: 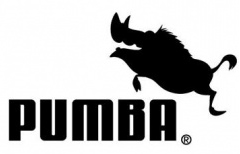