Advertisement for a well-known clothing retailer Benetton famous for its provocativeness. The last advertising company named Unhate, even deserved the condemnation of the Vatican, before Benetton the prospect of litigation loomed. 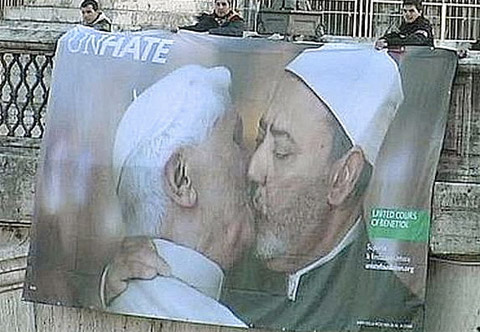 On the advertising posters that can be seen on the streets of the world's largest cities, world leaders and politicians are depicted, merged in a tender kiss. The art of photomontage made Angela Merkel and Nicolas Sarkozy kiss, Barack Obama and Hugo Chavez, Benjamin Netanyahu and Mahmoud Abbas, and many other politicians whose real relationship is far from peaceful.

The “kiss” of Pope Benedict XVI and the Egyptian imam Ahmed Al-Tayib caused a special protest and official dissatisfaction of the Vatican, the advertisement was recognized as disrespectful and will be suspended. The photographs were taken by photographer Oliviero Toscani, who previously also took part in the provocative advertising campaigns of the brand.

Well, the main goal was achieved - Benetton really attracted the attention of all sectors of society.