The brand under which the Anglo-Dutch company Unilever produces various deodorants for women (Rexona for Woman), men (Rexona for Men) and teenage girls (Rexona for Teens). One of the most successful cosmetic brands of the company. And one of the oldest - in 2008 it turned 100 years old.

Products Rexona appeared in Australia in 1908. It was based on a new technology that was developed by a certain Australian pharmacist and his wife.

In 1929 Rexona passes into the possession of Unilever. In the hands of new owners, the brand quickly becomes popular almost all over the world. It appeared in Russia in 1996. 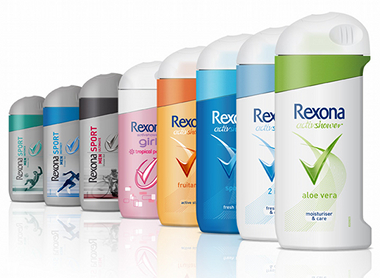 However, in the UK and Ireland, this brand is known as Sure, and in the USA and Canada - as degree. As for Japan and South Korea, there are minor changes in the name - Rexena.
special pride Unilever is the formula by which deodorants Rexona do not stain clothes. This moment has been repeatedly played up in advertising.
Total
0
Shares
Share 0
Tweet 0
Pin it 0