The German original slogan looks like "Quadratisch. Praktisch. Gut!". He is familiar to the Russians in transcription - “Kvadratish. Praktish. Gut". Well, the British still translated and adapted: “The handy chocolate square”. If someone is still unclear - square, practical, excellent. 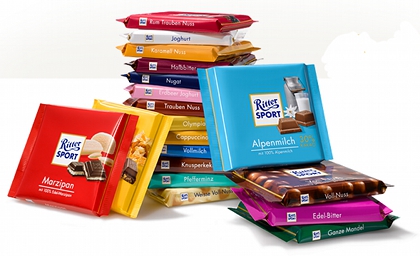 The name of the brand is the surname of the Ritter spouses: Alfred and Clara decided to produce chocolate in 1912. What made the product stand out and allowed it to enter the world market? First of all, the original form. A square tile weighing 100 g, divided into 16 squares, even now differs from all other confectionery products. And if the corporation bears the name of the husband, then the non-standard form of production, which ensured success, appeared thanks to the wife. Clara not only loved chocolate, but was also fond of sports, adequately assessing her passion for sweets and the body's need for exercise. And the square tile fits perfectly in the pocket of a running tracksuit and does not break during physical exertion.

Clara and Alfred founded their Ritter Sport Chocolade in 1932, now Alfred Ritter GmbH & Co. kg. Chocolate is produced in the best traditions of quality: the same original shape of a 100 g bar (there is a 250 g version, gift chocolate samples in the set) and impeccable taste. The manufacturer takes into account the trend of the times and constantly expands the palette of product flavors.

The history of the brand and the name "Ritter Sport" often cause controversy among consumers. As already mentioned, it came from the names of the founding spouses. Disagreements arise on the basis of the translation of the word "ritter", which in German means "knight". However, it is obvious that the army and military affairs have nothing to do with the name of the brand, despite the German origin of chocolate.

For a long time, the company produced not only classic tiles - the range was extremely wide. However, in 1952, Otto Ritter (son of the founders) took over as chairman of the board, and the company's policy changed radically. It was decided to leave only classic square-shaped chocolates in production, excluding any other types of products. The step was risky, so the reforms were carried out in stages, over a long period of time. For 10 years, the company has completely switched to the production of 100-gram square chocolates. By the same time, the design of wrappers was finally formed, with each variety getting its own recognizable color. Here, the advent of color television additionally contributed to the development of business.

Ritter Sport square chocolate bars are sold all over the world today. The company's headquarters is located in Germany, Baden-Württemberg, Waldenbuch. On the territory of Russia, too, for some time there was a plant in Odintsovo. But in 2008, the Germans abandoned this practice, since the quality of the ingredients in production left much to be desired.