This Swiss brand, under which watches and accessories are produced, has long and firmly been associated by the majority of the world's population with prosperity and luxury. Rolex, SA is one of the most famous and respected companies in the world. But it is interesting that the person who founded it was not a hereditary watchmaker. What can I say, he did not even come from Switzerland.

Hans Wilsdorf was a Bavarian by birth. And at first he earned a living as an employee of a large company engaged in the export of pearls. After working there for a while, he chose to move to a school friend's company that exported Swiss watches. So Wilsdorf got into this legendary world of Swiss watch movements.

But apparently working in foreign companies weighed on Wilsdorf. And after working for a friend's company for a while, he decided to leave and found his own, also working in the export of watches. It was located in London and was called Wilsdorf & Devis (W&D) - the second name in the company belonged to Wilsdorf's half-brother. The main field of activity was the supply of pocket watches to the shores of Foggy Albion. Third-party Swiss manufacturers were engaged in the production of watch movements, but the W&D monogram was placed on the cases of finished products.

However, Wilsdorf was sure that the future belongs to watches and dreamed of setting up their production on his own. And the first such watch appeared in 1905. The very first W&D models were distinguished by their luxury - they were worn on the arm with silver or gold bracelets. Unexpectedly, this product came to the taste of conservative British consumers, the company was waiting for success.

In 1908, Wilsdorf decided to rename the company, giving it a simple, but at the same time effective and memorable name, pronounced the same in any language. This is how Rolex is born. The exact etymology of this word is still unknown, the most likely assumption is that it is just a meaningless but memorable set of letters (a made-up word, as in the case of a completely different company from another part of the world - Kodak). Versions are also put forward that Rolex is an abbreviation or abbreviation, but again, these are just assumptions. On November 15, 1915, the name was officially registered and slightly changed in 1919 to Rolex Watch. 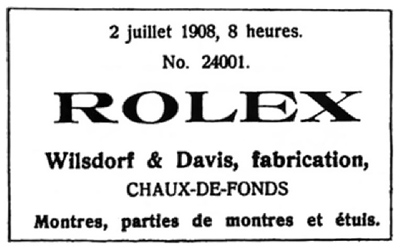 The main emphasis in the production of products was on quality, precision and exclusivity. From the earliest days, Rolex has not made products for everyone. And in 1910, another achievement - a wristwatch was created, which was officially assigned the status of a chronometer, which was previously considered impossible. The company also owns such achievements as the first waterproof wristwatch (1926); watch with automatic date change on the dial (1945); watch with automatic change of date and day of the week on the dial (1956). There were other achievements as well. 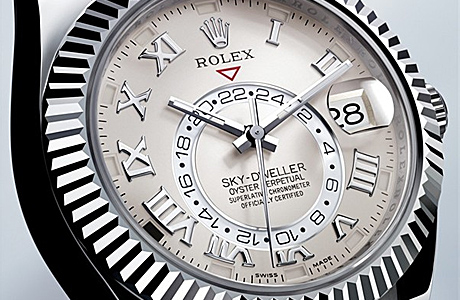 In 1919, due to the high duties imposed during the First World War on the import of precious metals into the UK, Wilsdorf decides to move to Switzerland, to Geneva. At the same time, the name of the company changed to Rolex Watch Company. Later, it will change two more times: first to Montres Rolex, SA, and then to simply Rolex, SA, under which it exists to this day.

The Rolex brand is one of the hundred most expensive in the world. It is the only company in the world of luxury producing up to 2,000 watches a day. She owns such well-known watch brands as Cellini and Tudor.

As for Rolex watches, their popularity is so high that the number of created fakes exceeds all conceivable limits. They are actively traded both in various shops and the Internet, and right on the streets. It is interesting that in some cases the quality of fakes is so high that only a specialist can distinguish them from the originals, and even then after opening the case and inspecting the mechanism.