Exactly 8 years ago, on November 11, 2001, a device went on sale that was destined to make a real revolution in the music industry. Since then Apple iPod is what is generally accepted as the standard for what an MP-3 player should be.

Only when it appeared on store shelves, the device made a splash, in the first weeks the sales level exceeded the bar of tens of thousands. The huge popularity convinced the creators to make the device available to PC users (initially iPod worked exclusively with computers Apple). As a result, the newcomer quickly replaced the players Sony Walkmanwho ruled the portable audio market for over 25 years. 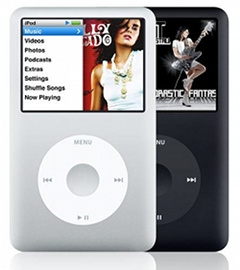 Over the years, several generations have changed, several lines have appeared. Was created and standing apart iPod touch, which is rather a PDA than a player in the classical sense of the word.

Now the popularity iPod began to decline steadily. The reason for this was his "big brother" - iPhone, also capable of performing the functions of a media player.