Company Sharp announced its intention to revise the policy of conduct in the personal computer market. From now on, the manufacturer will focus on tablet PCs and e-book readers, gradually curtailing the production of desktop computers.

To date, Sharp produces products that are in high demand by consumers. But apparently this state of affairs does not suit the company. 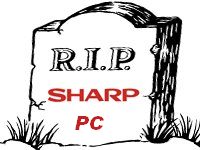 It is already known that the expected "tablets" will have a screen with a diagonal of 10 inches and run an operating system. Google Android. One of their distinguishing features will be the mandatory presence of a 3G modem. Sharp has already begun negotiations with the American mobile operator Verizon Wireless, in packages of which new items will be distributed in the United States, approximately from the beginning of next year. As for Japan, the first devices will appear there in December this year.

However, at the end of his statement, Sharp noted that it does not rule out a return to the PC market in the future.