Starbucks - This is perhaps the most famous coffee shop chain in the world. Besides Starbucks Corp. engages in the sale of coffee beans. The company was founded relatively recently, in 1971, and it began its journey as a network of coffee shops. The first store opened on March 30, 1971. The three founders Jerry Baldwin, Zev Siegl and Gordon Bowker, English teacher, history teacher and writer, decided to go into coffee bean sales and opened their first store in Pike Place Market, Seattle. . The shop was not only the first, but also the only one for a long time. But after ten years of shops Starbucks became five, in addition, the company had its own factory. In addition to selling coffee in its stores, the company was also a supplier of coffee beans for many coffee houses, bars and restaurants.

1987 marks a turning point in history Starbucks, Howard Schultz becomes the owner of the company, who made Starbucks as we know it today. Schultz has worked in Starbucks several years as director of retail sales and marketing, but could not fulfill his dream - to create a chain of coffee houses based on the company. Then he leaves the business and starts his own business - soon Schultz becomes the owner of a coffee shop chain Il Giornale. And in 1987 he returns and, having found investors, buys the company. Having bought Starbucks, he gives this unusual name to his coffee shops and combines two related activities into one company. Such an alliance turned out to be unusually successful and the chain of coffee houses Starbucks under his leadership she managed to conquer the whole world. 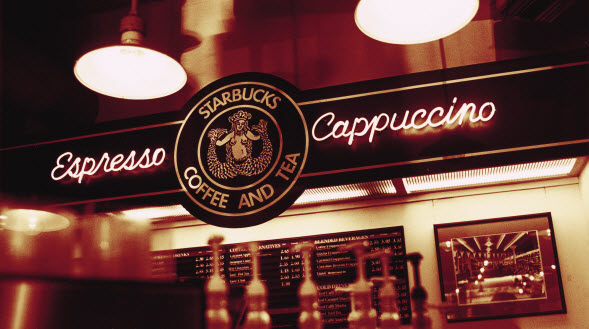 Your company name Starbucks received from one of the heroes of the novel “Moby-Dick, or the White Whale” by Herman Melville (and what else was expected from two teachers and a writer!). Starbuck - that was the name of the first mate on the ship "Pequod", on which the pursuit of the white whale, nicknamed Moby Dick, took place. The first version of the name of the coffee shop was "Pequod", after the name of the ship, but this word was rejected. Then the founders, according to one version, began to look for a suitable name, paying attention to the fact that the word reflected the local spirit and flavor of their native Seattle. According to legend, this word was "Starbo" ("Starbo") - that was the name of the old mine, located nearby. But the idea to take the name from the novel was still not abandoned, and a name was found that was consonant with the word “Starbo” - the name of the Starbucks' chief mate and became the name of the company. Contrary to popular belief, the first mate was not a coffee lover, but for a long time most people (with the exception of English literature teachers) will associate his name with coffee, and not with navigation.

But perhaps the most memorable element of the brand Starbucks became his logo. A mermaid or siren with two tails, found in an old engraving of the sixteenth century, has migrated to the emblem Starbucks and, although slightly changed, has remained there to this day, continuing the maritime theme of the company's name. A mermaid with two tails is a common character in medieval folklore, she was called Melusina or Melisande, this image was often used in heraldry. In 1987, the logo changes, combining the logos of the two companies Starbucks и Il Giornale, exactly from Il Giornale sign Starbucks and received its characteristic features - the mermaid was surrounded by a green circle with stars and the name of the company. Taking the opportunity, the mermaid herself was somewhat modernized. In 1992, the logo was changed once again, following the magnificent forms of the mermaid, any hint of her navel disappeared.

Starbucks today it is not only coffee, coffee drinks, desserts and snacks. The company is also engaged in related types of business - books, cinema, music, there is even a special division Starbucks – Starbucks Entertainment, which develops the entertainment direction within the company.

Coffee houses Starbucks are open in more than 50 countries around the world, the total number of the company's establishments is about 18,000. The company's headquarters is still located in Seattle, Washington.

At the conference Apple MacWorld 2007 Steve Jobs used the bell in Starbucksto demonstrate the possibilities of the first iPhone and play a little joke with the audience. Showing how the owners iPhone can use the Google Maps service from their device, Jobs determined his (and several thousand others) current location. And then I found the nearest coffee shop Starbucks and started dialing her number on his iPhone. The audience froze in anticipation - finally Jobs got through and with the most serious look ordered four thousand lattes to go. But before a few thousand people in the room had time to rejoice and start dreaming about a glass of hot latte, Jobs apologized and told the operator that he had the wrong number. Only the long-awaited novelties could console the disappointed guests of the conference, and Jobs, of course, was forgiven everything ...