Ambiguous decision of the CEO Nokia Stephen Elop to use Windows phone, led not only to a sharp drop in the company's shares, but also to the birth of many speculations and rumors. Too many people were dissatisfied.

First of all, it's the fans Nokiathat they regarded such a step as nothing more than a betrayal by their beloved company. After all, a long solution time from Microsoft were considered by them exclusively as something foreign, unworthy and not even close to a proud name Symbian.

Shareholders are also dissatisfied, who did not expect such a rapid fall in shares (by almost 25% in a couple of days).

Finnish trade unions are dissatisfied and now expect Nokia significant reductions - after all, the staff of programmers who were engaged in Symbian and other solutions turned out to be exorbitantly inflated. According to the most conservative estimates, more than 5,000 people could lose their jobs, despite the fact that Nokia about 20,000 work in Finland.

There was even an opinion that Elop was a "mishandled Cossack", whom Nokia abandoned by none other than Steve Ballmer, CEO Microsoft. Given that Elop owns a solid stake in the largest software maker, these rumors may not even be groundless. By the way, union Microsoft и Nokia already got a nickname Microkia. 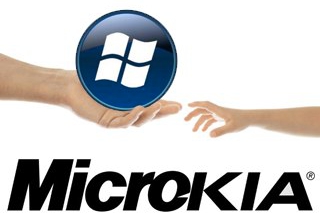 Immediately after the announcement of the transition to Windows phone, an idea was born on the Web, called Nokia Plan B. Someone suggested doing everything possible to remove Elop from his position and return to the old values. However, more sober-minded people objected to this that it was the policy of using the completely obsolete Symbian and led to such serious problems.

Today, information appeared on the Web that before choosing WP, in Nokia We also considered alternative solutions in the form Android и BlackBerry OS. However, the transition to the first could be regarded as an even greater shame. Moreover, there is an opinion that Nokia suggested Google make some major changes to Android and received a categorical refusal. As for BlckBerry OS, then R.I.M. refused to license her OS - she simply does not need this.

Most disturbing is the fact that Nokia may just not be able to. After all WP other smartphone manufacturers are already using it, while the Finns will need a lot of time to bring the finished product to the market. The company has already presented the first prototype on the Web, which is only a three-dimensional model, and a considerable time will pass before its “iron” implementation, even despite the billions that it will “pump” into Nokia Microsoft.

So it is insanely difficult to predict what the future holds for the former leader. Time will tell. Nokia It has long been in need of changes, but they turned out to be too drastic.