Slogans: Ideas you can´t live without
Tefal. Not without your ideas

Brand Tefal, one of the world's most famous brands, began its history back in 1954. It was then that the French engineer Marc Gregoire discovered a method for applying polytetrafluoroethylene, also known as PTFE or simply Teflon, to aluminum surfaces. It is now (thanks to the efforts Tefal) almost the whole world knows about the wonderful properties of this substance. Well, then it was used only by specialists, and they had nothing to do with household appliances. For example, Teflon was actively used in aerospace research.

According to the official legend, Mark was an avid fisherman and was engaged in improving the quality of his spinning. When, thanks to the application of Teflon, the retractable system of this fishing device began to work like a clock, the engineer enthusiastically told his wife, Colette Gregoire, about this. She was a very practical woman and immediately understood where else you can use a substance that does not stick to anything. Her husband fulfilled her order by creating for her the world's first non-burning frying pan.

The idea to create a company for the production of miracle dishes hung in the air. A couple of years were spent on patenting the technology and paperwork, which is inevitable when solving such issues. The company was born in 1956 Tefal, whose name has become a derivative of two words - TEFlon and Aluminium. The head office of the new company was located in the city of Sarcelles, which is located near Paris. To date, the office has moved to Rumilly, and most of the factories have moved to Asia. 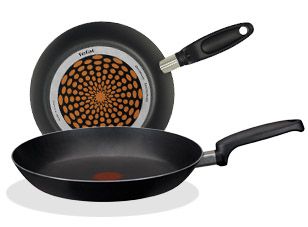 We launched a rather noticeable advertising campaign, the slogan of which was the phrase "The Tefal pan: the pan that really doesn't stick" ("Tefal frying pan: it's a frying pan that nothing sticks to"). Success came quickly - after a short time the company produced up to 100 pans a day. They quickly flooded France, then other European countries, and by 1961 they had reached the United States. Thanks to successful advertising and innovative merits, these pans were already selling in the thousands a day. Incidentally, in the US Tefal called T-Fal.

In 1968 Tefal becomes the largest tableware manufacturer in France. This year was also marked by the fact that the company is part of the group SEB, engaged in the production of household appliances (today this group includes brands such as Krups, Moulinex, Rowenta и Tefal). With this, the expansion of the range of manufactured products began. branded Tefal not only frying pans are produced, but also various small household appliances, waffle irons, irons, deep fryers and the like appear. But still, the main focus is the dishes. The company tirelessly conducts research in this direction, introducing more and more innovative solutions to the market. Successful and memorable advertising still plays a role in its development. Are there people on the territory of the former USSR who have not yet learned that "you can't do without ideas from Tefal" and what "Tefal always thinks of us"?

Speaking about the success of advertising campaigns that are carried out Tefal, it is impossible not to tell that in the late 80s and early 90s of the last century in the UK slang phrases were used Tefal Head or Tefal Man. Which meant smart people. The fact is that it was then that the company launched an advertisement in which the image of scientists who sang about these products was actively played up.