The history of this American manufacturer of outerwear began in 1952. It was founded by Nathan Schwartz, who was born in Odessa and emigrated with his parents to the United States just before the start of the First World War. For a long time he, continuing the family tradition, worked as a shoemaker. However, unlike his ancestors, he was not satisfied with such a role, he wanted more. Therefore, Nathan kept saving money and waiting for a good opportunity. In 1952, he made up his mind and bought half of the shares of a certain unknown company - The Abington Shoe Company, located in the town of Abington, which is located near Boston, Massachusetts (Boston, Massachusetts, USA). Things went well for him and, three years later, he redeems the rest of the shares, becoming the full owner of the company. By that time, his sons were already helping him. But this was not enough for Nathan - he wanted his company not only to remain one of the many, but also to become famous, at least in the United States. But desire alone is not enough, diligence, original ideas and a certain amount of luck are also required.

And the case presented itself in 1965, when they managed to invent a new technology that provided a seamless connection between the sole and the leather upper and increased the waterproofness of the shoe. This quality could not but affect the growth in popularity of shoes that were produced at Nathan's factory.

By the way, the first shoes created using the new technology were yellow. The official legend says that they were specially made like this, since all their advantages were especially clearly visible on such a soiled color. One pair of these shoes is now in the London Design Museum. The yellow color also played another useful role - the products became recognizable, which is important. 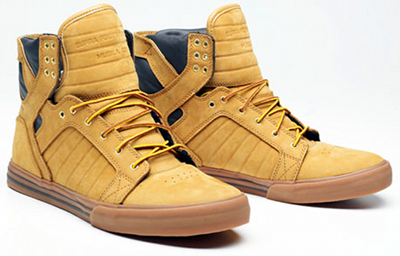 In 1973, a significant event takes place - the birth of a new brand. Name Timberland translated as "forest plot" - this is the designation of forest land rich in valuable wood. So the logo, which depicts an American oak, looks very logical. In 1978, due to the growing popularity of the brand, it was decided to rename the company to The Timberland Company. By that time the brand Timberland was known not only in the USA, but also in Europe, especially in Italy. This happened thanks to the Italian Giuseppe Veronesi (Giuseppe Veronesi), who bought in 1979 a batch of 3000 pairs of shoes at once, and the following year he returned enthusiastically for the next portion. Thus subject to Giuseppe company Ritz Firma (subsidiary FinRitz SpA.) became the first European distributor Timberland.

In 1988, the first clothes appear Timberland, which was very favorably received by the public .. Initially, only men's collections, and then, after a couple of years, women's. In 1996, children's collections began to be created.

Today, branded stores Timberland, the number of which has long exceeded one thousand, can be found in many countries of the world. The production facilities are also widely scattered. In recent years, some well-known brands have been absorbed − howies, iPatch, smartwool, Mion и GoLite. As for the old company name, Abington now name one of the shoe collections Timberland.

Company headquarters The Timberland Company is located in Boston. The company is still a family business.