Tagline: Where You Turn

Most of all the company Timken known for its roller bearings. However, it also deals with specialty steels, special lubricants and many other specialty products that are of interest to so many industries, such as aerospace and mining. It is actively used by the military and power engineers.

And it all started back in the 19th century, when engineer Henry Timken invented and patented a special bearing design - a tapered roller bearing. In 1899 he founded the company The Timken Roller Bearing Axle Company. It was in St. Louis, Missouri (St. Louis, Missouri). Two years later, it was decided to move to the city of Canton from Ohio (Canton, Ohio), where the company's headquarters are located to this day. The move was not accidental - the fact is that Canton is strategically very advantageously located - nearby are both raw material producers and consumers of finished products in Detroit, where the automobile industry was actively developing. Namely, cars played a very important role in early history. Timken. They play an important role even today.

Many tire manufacturers began to develop actively due to the fact that their products were installed on the wheels of cars that won one or another major competition. The same scenario was expected The Timken Roller Bearing Axle Company: in 1911 a Marmon Wasp car built using bearings Timken, won the Indy 500 (500 miles of Indianapolis). 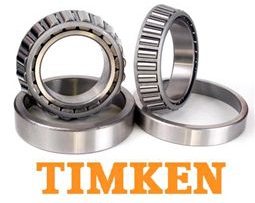 1917 was marked by the expansion of production - the company launches its first steel mill, thanks to which it is no longer so dependent on third-party raw material producers. In addition, it also allows expanding the range of products, entering markets not related to cars. Gradually bearings Timken penetrate into agriculture and railway business. Over time, the military also began to be interested in the company's products. For example, it was widely used during the First and Second World Wars.

In 1970 the name was simplified to Timken Company.

Nothing could stop the development of the company. Its products have always been in demand and enjoyed not only demand, but also great respect. This made it possible to enter the markets of other countries, build new factories and absorb competitors. This process took place throughout the second half of the 20th century and continues into the 21st century. Its most serious opponent in the US market, the company The Torrington Company, Timken Company took over in 2003. Thanks to this, all major competitors are now only in Europe and Japan. And the acquisition in 2007 of the company Purdy Corp. allowed to expand the range of products for aerospace needs. A year later, thanks to the takeover EXTEX Ltd., this list has been further expanded.

In 2010, thanks to the magazine Forbes, Timken Company ranked among the most reliable companies.