To date, the brand Tuborg belongs to the world famous. This beer has been produced in Denmark since 1873. However, by the standards of "beer" brands, this is not even age. The brewery was founded by Carl Frederik Tietgen near Copenhagen. The company got its name in honor of the once located nearby ancient building, built in 1690 and originally called Thuesborg.

One of the features Tuborg was that the beer was originally bottled, which was a novelty in Denmark in those years. This made it possible to quickly gain popularity and stand firmly on its feet. And the expansion of the range of produced beer varieties allowed to consolidate the success. So, in 1880 there appeared Tuborg Green, very popular to this day, and five years later - Tuborg Gold. 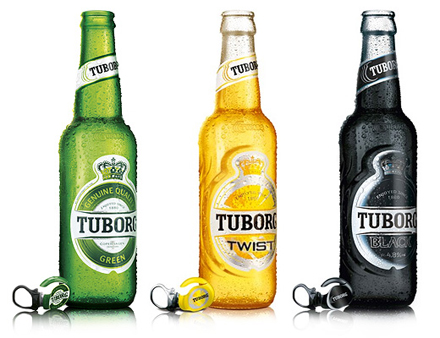 In 1894 Tuborg and 11 other Danish manufacturers united to form United Breweries. The goal was to resist Carlsberg, which was already the largest brewery in Denmark in those years. However, almost a hundred years later, in 1970 Tubor (as well as all other companies that were part of United Breweries) was still absorbed Carsberg with education Carlsberg A/S.

beer today Tuborg produced under license in dozens of countries around the world. As for sales, here the number of countries has long ago exceeded one hundred. An annual music festival has been held since 2005 Tuborg GreenFest, which often hosts various world-famous musical groups and individual performers.

Mindful of the advantage that the now so familiar beer bottle once gave, the brewery even erected a monument to it. This is a huge bottle of beer, 26 meters high.Tuborg". Anyone can climb onto its "lid" - from there a magnificent view of Copenhagen opens. It is estimated that this huge bottle has the same volume as 1.5 million ordinary beer bottles.