Tagline: Making cats happy everyday
Whiskas - be happy
9 out of 10 cats prefer it
Eight out of ten owners say that their cat prefers it
Your pussy would buy Whiskas
Because the cat trusts you

Whiskas is a brand of cat food that is produced by the company Mars Inc.. For the first time this type of food appeared on the market in 1958 in the UK, it was produced by the division Pedigree Petfoods Ltd. in Melton Mowbray (UK), which also produces other well-known varieties of animal feed: Chappie, Kitekat, Pedigree, Royal Canin. Company Pedigree Petfoods is part of a corporation Mars since 1935, when it was called Chappel Brothers Ltd.

In 1968 Mars Inc. acquires another cat food company - American Kal Kan Foods. Her cat food became the basis for the brand Whiskasas the American market saw it. In 1980, the company released another variety of cat food - crave, in 1988 this variety also becomes part of the brand Whiskas. 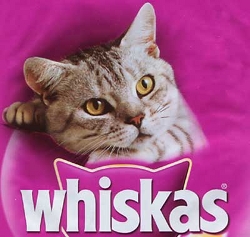 The creation of a single brand for both European and American countries, as well as for Asian countries, was a well-thought-out and successful decision to conquer the international market. Besides, Whiskas was the first cat food to offer consumers several different flavors, quickly establishing itself as a market leader and becoming a major brand in the industry in Europe and Australia.

The brand, beloved by cats and their owners, appeared on the markets of the CIS countries in 1991.