It would be more accurate to say that there were two pushes in the life of the "magic" brand: the first led to the creation of the brand - this push was the international success of the original book and the film, shot in 1971, directed by Mel Stuart (Mel Stuart), and the performer starring Gene Wilder. But time passed and interest in the world of the Chocolate Factory faded, as did interest in the brand, new films and new brands appeared. Brand Wonka, like many others, quiet oblivion awaited, if a few years ago, director Tim Burton (Tim Burton) decided to re-play the story about the journey of a little boy to the Chocolate Factory and did not invite his friend Johnny Depp (Johnny Depp) to the main role. In 2005, he created his own version of Charlie and the Chocolate Factory, which captured the imagination of a child audience and brought back interest in chocolates. Wonka from Nestle. 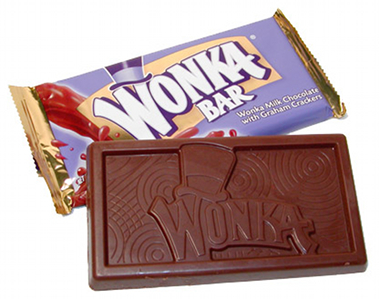 Riding on the success of Barton's film, the brand Wonka not only revived, but also replenished with new sweets and new marketing ideas. Like the heroes of the film, modern children also got the opportunity to find a golden ticket and go on a trip to a candy factory.

branded Wonka Kazoozles, Gummies, Everlasting Gobstopper, Fruit Runts, Laffy Taffy and several dozen other types of sweets and, of course, several types of chocolate are produced. The names of some sweets and chocolates were invented for Nestle, but some of them were actually mentioned in the book, for example, the famous chocolate bar Wonka Bar plays an important role in the development of the plot.

All visual materials used in packaging and advertising of the brand strictly correspond to the original source, Nestle based the image of the brand on the illustrations of Quentin Blake (Quentin Blake), and the prototype of Willy Wonka was the actor who played him in the 1971 film Gene Wilder.