Family secrets, fraternal rivalry, warring clans, human dramas against the backdrop of the turbulent events of world history... Do you think this is a description of a novel or a movie? No, all this happened in real life, this is how the history of two brands familiar to us, it would seem, the most ordinary manufacturers of sportswear and accessories - companies Puma и Adidas.

Let's start with deciphering the names of both companies. Few people know that behind the usual brand names are the names of two brothers Adolf (Adolf) and Rudolf (Rudolf) Dassler (Dassler). Adidas - came from Adolf (Adi) Dassler, Puma came from a not so euphonious Ruda - Rudolf (Rudy) Dassler.

Why did the two brothers choose to build their own company, and not go by combining efforts and family capital? Initially, everything was exactly like this: the shoe factory of the Dassler brothers was a model of a German family business of the 20s. The entire Dassler family, including parents, brothers and sisters, worked hard, little by little creating a family business. Since Adi Dassler was a sports fan and a good football player, he enthusiastically took up the creation of sports shoes, later his brother and the whole family joined him. From small orders that were carried out by hand, right in the laundry of their own home, gradually expanding and working day and night, the family finally achieved its first success.

Soon the factory opens solemnly, a family business - Gebrüder Dassler Schuhfabrik (“Shoe factory of the Dassler brothers”). The Dassler brothers were an extremely successful pair of leaders. Rudolf was an excellent manager, he wanted to expand the business and establish new connections, and Adolf was an excellent engineer, it was he who owns all the best ideas of the company, he was a born designer and inventor. The business is flourishing, the flow of orders is growing, the family business is actively developing. 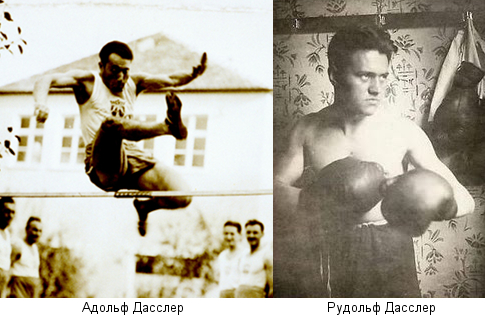 The 33rd year becomes a turning point for the company of the Dassler brothers, as well as for the whole of Germany, and then for the whole world. Adolf Hitler comes to power in the country, everyone is faced with a choice, and the brothers unanimously rely on a new leader and join the NSDAP. They see bright prospects for the company in a future Nazi Germany. In addition to political motives, an important role was played by the cult of a healthy body, mass sports, characteristic of the ideologies of all totalitarian regimes, all this was perfectly combined with the business of producing sports shoes. But Nazism brings with it consequences that are not so attractive for business, the Dassler brothers are forced to participate in the flaring war. Adolf Dassler soon returns to work, but the factory no longer produces sports shoes, but weapons for the army. Rudolf Dassler continues to serve, according to rumors, he was even a member of the Gestapo. The same rumors persistently claim that at the end of the war, during the investigation conducted by the US military, Adolf Dassler actively participated in the process of exposing and accusing his own brother, on his behalf a denunciation was written accusing Rudolf Dassler of participating in Gestapo activities. Backward accusations followed, with mutual attacks and digging through the family's dirty laundry. After the proceedings, Rudolf Dassler was placed in an American internment camp, but soon returned to the management of the company.

More and more contradictions accumulate in family relationships. The brothers, who once worked together for a common cause, have now become mortal enemies, not ready to forgive insults and give up even the smallest things. This was greatly facilitated by the tension that arose between the wives Adi and Rudi, two families working and living together accumulated grievances for a long time, and finally, all family misunderstandings, friction, nit-picking and conflicts spilled out. This period in the history of the two companies is often referred to as the "Great Gap". The rivalry between the brothers, once expressed only in sports and children's games, has now grown into deadly enmity and implacable hatred. Both brothers considered themselves worthy to lead the family business, the two owners were crowded in the same factory.

The war revealed all the contradictions that had accumulated between the brothers, and in 1948 the family company ceased to exist, now each of the brothers had to run his own business. Competing companies emerge Addas, now known to us Adidas, and Ruda, today - Puma. The piquancy of the situation was that none of the brothers did not want to leave their hometown of Herzogenaurach (Herzogenaurach) and start their business from scratch. The company was physically divided into two halves, along with the company, the town where the factory settled also split. A feature of the split was the river, dividing the city into two parts - on one bank it began to develop and is still developing successfully Adidas, on another - Puma. Most of the workers lived and live on the same bank today. Adidas, on the other - workers Puma, the enmity between the inhabitants of one city never stopped, the relations of the inhabitants of the two banks of the river resemble the relations of the fans of two rival teams, which are passed down from generation to generation and do not lose their intensity, although no one can name the exact reason for dislike for each other. There is a joke in the town that when meeting someone, a local resident first of all looks at the shoes in order to understand whether a stranger wears Puma or Adidas, whether he is friend or foe, his own or someone else's.

The war of brands is not limited to the boundaries of one small town, the arena has become world sports, such as the Olympic Games and the World Cup Finals. And the actors were the most famous sports stars, fabulous sums and not the most clean methods were used. Adidas managed to attract Muhammad Ali, Zineddin Zidane, David Beckham to advertise their products, and Puma, in turn, enlisted the support of Boris Becker, Pele, Martina Navratilova and many other famous athletes. However, the brightest stars in the world of sports used to move from one enemy camp to another, attracted by the rustling or ringing of gratitude from the companies. Big money was used, bribery, even industrial espionage. As both companies entered the global market, accusations of stealing ideas arose more and more often, and competition became fiercer. A whole war broke out around the possible cooperation of one of the firms with a football star - Pele. The companies entered into a kind of “Pele Pact”, none of the companies should have “claimed” to cooperate and negotiate with the athlete, since both parties reasonably assumed that trying to exceed each other’s money offers, as in a kind of auction, they would go beyond all possible financial limits and not only undermine the budget of one of the companies, but also create a dangerous precedent in the world of sports, raise those unspoken prices that have already been established in relations between athletes, primarily football players, and companies producing sports shoes and accessories. But the pact was broken Adidas nevertheless, Pele paid for advertising her products, violating all agreements. This greatly spurred the feud between the companies, which now included the sons of the founders Armin and Horst Dassler, and predictably drove up the prices of advertising services in the sports world. 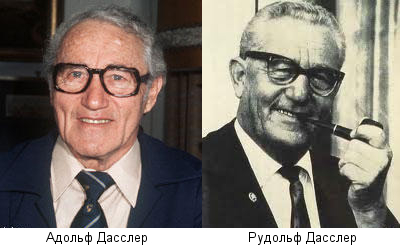 Adolf and Rudolf Dassler did not communicate with each other until the death of one of the brothers. Although their relatives testify that both brothers were ready to reconcile and forget about their grievances, the local priest even negotiated a possible meeting, but the first step was not taken, the brothers never saw each other. Rudolf Dassler died in 1974, four years later his brother also died, the brothers were buried in their hometown of Herzogenauerach. Their graves are located at different ends of a small cemetery in a small town.

Control Adidas и Puma for a long time carried out by the families of brothers, the struggle continued in the form of competition between two concerns of world importance. But today both firms are no longer family businesses, they have long since become joint-stock companies. Adidas и Puma although they remained competitors in the sports shoes and clothing market, but this competition moved into the business sphere, no one remembers the heat of passion that raged when the brands were young. And buyers choosing between Puma, Adidas or Nike most often they do not know and do not really want to know about the legends and real stories of the birth of companies.

Summing up this dramatic story, it would be interesting to get an answer to the question: would the two companies have become world leaders if there had not been such fierce competition between them? If we knew about the existence of brands Puma, Adidas or Dassler (if history had turned out differently), or maybe the shoe business would have remained a family business in a provincial German town, respected and firmly on its feet, but little known to anyone?

More details about the events described in the article can be found in the book by Barbara Smith (Barbara Smit) "Three stripes against Puma" (German - "Drei Streifen gegen Puma", English - "Three Stripes Versus Puma"). This story is also the basis of the film released in 2007 by ECO Media for WDR “Adidas vs Cougars. The story of two brothers” (“Adidas vs. Puma: The Tale of Two Brothers”).