As you know, the Peugeot family began to engage in manufacturing business in the 18th century. A century later, they began making hand grinders for coffee, salt, pepper, and other groceries. Then the assortment was expanded with umbrellas, bicycles, and then cars. As for the logo, it appeared in 1847, thanks to the efforts of the artist, jeweler and engraver Justin Blazer. The logo was officially registered in 1958.

Few people know that in fact, at first it was supposed to use three logos at once, and each of them was developed for its own product class. A lion with an arrow was intended for products of the highest category. The crescent crowned the products of the second category. Well, products that could not boast of decent quality were marked with the image of a hand. However, the practice of such a strict division of goods was quickly abandoned, and as a result, only one lion remained, which was destined not only to become a classic of logos, but also to go through a series of transformations, losing an arrow along the way. 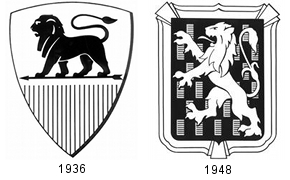 Despite the fact that experiments with the creation of cars began in the 19th century, the image of a lion on them appeared much later - only in 1905. Prior to this, the role of the logo was simply the inscription "Peugeot". However, the lion finally “lived in” cars only by 1933. By that time, it was decided to somewhat simplify the image of the lion, making it more memorable.

By the way, during the 20s of the last century, car owners Peugeot hoods were often decorated with statuettes by sculptors René Baudichon - the original statuette appeared in 1923, and Maurice Marx - in 1925. Now these "logos" are a collector's rarity. 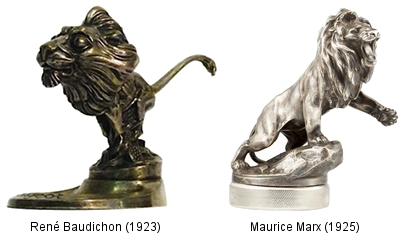 In 1948, the lion completely transformed. He stood on his hind legs, acquired a heraldic appearance and got rid of the arrow. The idea was borrowed from the coat of arms of the Franche-Comte region (Franche-Comte), where the Peugeot family historically lived in the town of Valentenier.

True, in 1960 an attempt was made to use the logo in the form of a lion's head on a shield, the appearance of which was slightly changed in 1965. However, in 1970, the heraldic lion again adorned the radiator grilles. Peugeot.

Subsequently, he underwent changes several more times, however, they can be called rather cosmetic - the logo was simply adjusted to the trends of the time. The most serious change can only be called that in 2010 the lion lost his tongue and became more rounded.

In fact, there were a great many variations of logos with a lion standing on an arrow. But for the most part they were unique, used on a particular series of products.
Total
0
Shares
Share 0
Tweet 0
Pin it 0