Company LG announced its intention to become the market leader in 3D TV and in 2010 to take a share of sales in 25%. To do this, the South Korean electronics giant has set an ambitious goal of selling a million TV sets by the end of the year. This figure is no coincidence, with total sales forecast for the booming new market this year to reach 3.8 million units.

The statement was made in connection with the launch of a novelty - Full LED LCD 3D TV LG LX9500. The new Infinia-branded TVs will cost around $4,000 (47-inch model) and will go on sale in South Korea next week and worldwide by May. 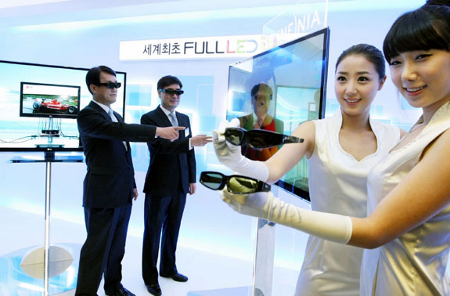 The use of new technologies, in particular, unique illumination provides the viewer with a high-quality 3D picture. And if you decide to put on special glasses, then the reward for an hour and a half of shame in front of the household will be a complete immersion in the world ... well, where do you like to dive there. The main thing is to return, your family and homeland need you.

Representatives of the company hope that the unique technologies and inherent technology LG original design will leave behind competitors. But while competitors, first of all, Samsung и Panasonic have a time advantage, their 3D TV models are already in the US. While LG still only plans to enter the US and European markets, presenting the model only for South Korea. 3D TV set to be released in June from Sony.