As you know, some menu items in the McDonald's $1 is already marked down in price. However, to increase the popularity of fast food, the list of budget proposals will have to be expanded. The global recession is to blame.

Now Sausage McMuffin, coffee, sausage burritos, etc. will be added to the list of cheap meals, which already includes eight items. By the way, in some cities and states, these dishes are already on sale for a dollar or less. At locations where a small coffee, for example, already costs 89 cents, they will allow other "dollar" dishes to be added in return. 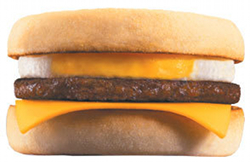 Most fast-food restaurants, which have recently invested heavily in promoting the idea of breakfast in fast-food chains, have recently seen a decline as fewer people stop in the morning for coffee and a snack before work.

A study conducted by NPD Group revealed - most national fast-food restaurants saw a 2 percent drop in summer morning traffic. However, according to data from the very McDonald'sThe company is doing well in this field and attendance, on the contrary, is growing, although the growth has slowed down a bit recently. No specific figures are given.

The appearance of the "dollar" menu from the McDonald's forces competitors to retaliate as well. Such proposals have appeared at Dunkin Donuts и Burger King.