Yesterday, October 23, it was ten years since the first player appeared on the market. iPod. The significance of this event is difficult to exaggerate - the device that has become so familiar today managed to radically change the entire music industry.

First iPod equipped with a 5 GB hard drive and cost $399. They could only work with Mac computers that used a FireWire port to connect to. Sales began on October 23, 2001. The success turned out to be unexpectedly loud and the company was bombarded with requests to make the player available to PC users as well, which was done in 2002. 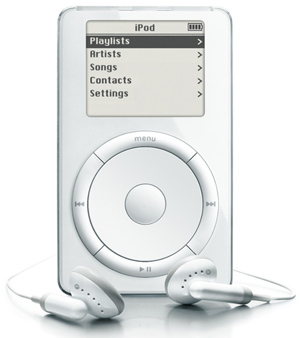 The success of the player was based most of all on an exceptionally successful design. MP3 players of that time were either downright ugly or didn't have enough memory. At the same time, the MP3 format has already become quite popular. The market has matured, but only Jobs was able to notice it.

However, his merit lies not only in the very idea of the player. By itself, the device would not be able to make any noticeable coup. The main achievement was the opening of the store iTunes, in which anyone could purchase a single song without spending money on the entire disc. When starting the store, Jobs had to work hard to convince conservative musicians to put their music on sale in iTunes.

Now it's hard to believe that just 10 years ago everything was different, and the world of portable players was ruled by Walkman from Sony. Over the years the brand iPod became one of the most famous, hundreds of millions of devices were sold around the world.