Today is the anniversary of one of the most famous brands owned by the company Nestle. Chocolate kit kat, which is known almost all over the world, is already 75 years old. For the first time this sweet appeared in 1935, that is, in another era.

But in fact, the trademark "Kit Kat" is somewhat older - it was registered in 1911. But almost 18 years passed before confectioners created the concept that is still used today - four small chocolate bars with a crunchy filling. The recognizable logo appeared on the packaging a little later - in 1937. In those years, the brand was owned by Rowntree. 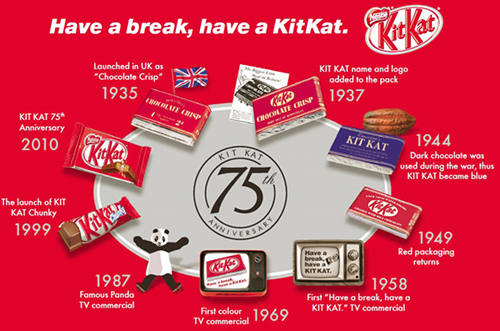 In 1989, Rowntree was taken over by the Swiss Nestle. To date kit kat two companies produce at once: those chocolates that are sold in the United States produce The Hershey Company, and those that diverge in almost a hundred countries around the world - Nestle.

By the way, over the years, more than once or twice, attempts have been made to diversify the taste of chocolate bars. But all of them did not have any success, as a result of which the manufacturers settled exclusively on the release of only the classic version. kit kat.