Finnish manufacturer of tires for cars, trucks, buses and various special equipment. It is especially famous for its winter tires - nevertheless, the Scandinavians know well what winter is.

It all started from the factory Finnish Rubber Works (Suomen Gummitehdas Osakeyhtiö - Finnish Rubber Factory), engaged in various rubber products, which was rebuilt in Helsinki (Helsinki, Finland) back in 1898. They were mainly engaged in the production of galoshes and boots for walking in the swamps. 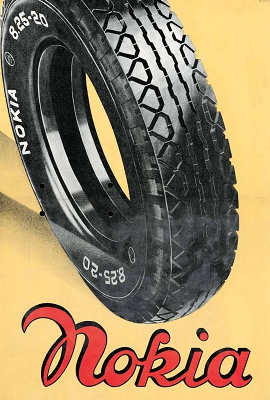 In 1904, due to the growth of production, the company moved to the town of Nokia (Nokia), where it is located to this day. In 1925, the first bicycle tire appears. Products for cars began to be produced in 1932. The first winter tires (Hakkapeliitta) appear in 1936. In this field, the company was waiting for success - by 1945, it took the construction of a plant dealing exclusively with tires.

In 1967, the company became part of the corporation Nokia, which then consisted of three divisions - rubber, woodworking and electrical.

Company Nokian Tires (in the Finnish manner - Nokian Renkaat) appeared in 1988. Then in Nokia major changes were taking place, the company decided to abandon additional production, focusing entirely on telecommunications. Since then Nokian Tires has nothing to do with its parent company. By the way, two years later, based on the same former "rubber" capacities Nokia Another company was founded Nokian Footwear (Nokian Jalkineet).

Production capacity Nokian Tires are already located not only in Finland, but also in Russia, in Vsevolozhsk - the plant in this city was rebuilt in 2005.