In fact, several weighty books could easily be written about this company. It can be said without exaggeration that Apple - one of the brightest technology companies that appeared in batches in the 70s of the last century.

The history of the "fruit company" contains a lot of folklore motifs. Many seemingly simple events are retold in a variety of ways, overgrown with myths and conjectures, turning into beautiful legends (which is worth only history of the bitten apple on the logo). And this applies not only to the Applebut also to the products it produces. Needless to say, the very first computer she created - Apple 1, with which it all started in 1976, is now a real collector's value, estimated at hundreds of thousands of pounds. Many are now surprised by such an attitude towards this freak in a wooden box. However, it was this computer that laid the foundation for the industry as such, and it was with an eye on it that numerous decisions from other manufacturers were subsequently made.

The birth of the company came from the union of technical genius Stephen (Steve) Wozniak (Stephen Woźniak) and marketing genius Steve Jobs (Steve Jobs). They met thanks to Bill Fernandez, their mutual friend, who decided to bring future partners together, not doubting that they would find a common language. 26-year-old Wozniak then studied at the University of Berkeley, and the younger Jobs had already graduated from high school and still did not know where to go. They quickly found a common language - Fernandez was right.

Creating a computer that would later be called Apple 1, Wozniak did not even think about any kind of commerce. He simply loved technology and dreamed of creating a computer that "any cook" could work with. It wasn't the first personal computer, but it was the first personal computer to have a monitor and keyboard instead of a bunch of lights and switches like the earlier Altair 8080. Plus, the Apple 1 was sold as a finished product, not do-it-yourself kit, as is the case with other models. 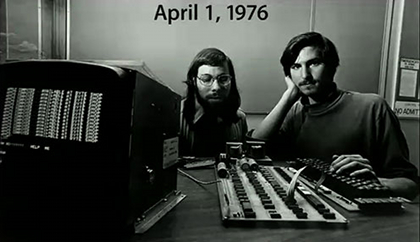 In those years, Wozniak was still working in Hewlett Packard and under the terms of the contract, all his developments belonged to employers who had the right to do with him whatever they pleased. But, fortunately, the personal computer did not interest the company's management at all.

The first $50,000 order came from the store Byte Shop, which is now revered as the very first computer store in history. It's long gone, but its name has gone down in history, which, however, circumvents the fact that this deal was so profitable for the owner of the store, whose name was Paul Terrell (Paul Terrell). The selling price of the Apple 1 was $666.66 (the device cost the creators $500). Such a strange price arose from Wozniak's love for repeating numbers. To 500, they simply added another third, as an extra charge for the work. 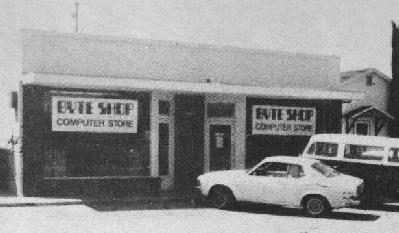 Officially Apple Computers was founded on April 1, 1976. In fact, there were three founders. The famous couple was joined by their friend Ronald Wayne, who worked with Jobs at Atari. He then owned 10% shares Apple and dealt with legal and paper matters. However, he did not work for the company for long - as soon as the main legal issues were resolved, Wayne left Apple and gave up his share (which in ten years was measured in hundreds of millions of dollars).

The Apple II (1977) turned out to be a real masterpiece. It was the first computer that was mass-produced by the company. Many other models of personal computers were subsequently created on its basis. For example, many PC developments in the USSR were based on the Apple II. The computer in the case, the forms of which were borrowed from the cassette recorder popular in those years, appealed to many users of those years. He looked great both in the office and at the university. The model was sold until the early 90s, with only minor changes in design.

But the Apple III project (1980) was a failure. Jobs insisted on getting rid of the fans, rightly believing that they would interfere with their noise. That's just the result is an extremely unreliable, prone to overheating device. In addition, the rush in which it was assembled led to a sharp drop in quality. All this led to a failure in the market.

While Apple II brought money, the company was engaged in new projects - Lisa и Macintosh, the main feature of which was the presence of a graphical interface, safely borrowed from Xerox (later, in the same way will appear and MS Windows). The first project, named after Jobs' daughter, sunk into oblivion, the second, which was named after a variety of inexpensive but popular apples, was destined to become a new legend. On sale Mas appeared in 1984, preceded by the famous "1984" commercial, which is still considered an example of what advertising should be. First Macintosh was not the most successful computer from a technical point of view. Rather, on the contrary, beautiful in appearance, he was a real congestion of problems, the elimination of which took a lot of time. However, the high respect that Appleallowed her to overcome all adversity. And the gradual transformation of the Mac into a real working tool has made this computer one of the most popular. For him, software packages have been created by companies such as Aldus (desktop software Page Maker) and Microsoft (spreadsheets Excel). Analogues of this software on the PC appeared only after some time. 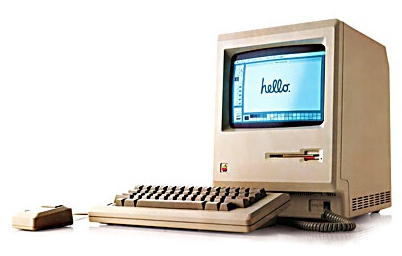 In 1985 Apple leaves Steve Jobs. He leaves to return again after a decade and revive his brainchild, which had fallen into despondency by that time. However, the word despondency is not entirely appropriate here. Jobs himself noted later how he was surprised and delighted that, having returned to Apple I saw that a lot of really interesting people and talented engineers still work in it, who at one time took part in the creation of many interesting projects. It is now generally accepted that Jobs returned to a company that was dying. But this is not true. Yes, things are Apple went not in the best way, however, the then CEO Gil Amelio (Gil Amelio) managed to achieve a lot, the company had no debts, it brought, albeit a small, but profit.

During the absence of Jobs, the company created solutions such as laptops powerbook and handheld computers newton. The former are extremely popular today under the name Macbook Pro, the second reincarnated in 2010 as iPad.

The return of Jobs led to the creation of products such as iBook (now macbook), iMac resurrecting the idea of a simple computer for everyone, and iPod, who was destined to turn all the foundations of the music industry. But the most striking event was the appearance in 2006 iPhonethat has played such a huge role in the mobile phone industry. This smartphone has served as the basis for the emergence of many other touch devices and has brought new manufacturers to a market where there is no longer room for veterans such as Nokia, Motorola и Sony Ericsson. It was finally clear who now began to set the tone in the smartphone market, it became after the Finnish company, realizing that it was no longer able to create competitive devices, launched multiple litigations.

By the way, since the company was no longer exclusively engaged in computers, in 2007 its name was changed from Apple Computers on the Apple Inc..

One of the important achievements of the company after the return of Jobs was its transition to the latest macOS X, which replaced the good, but completely outdated macOS Classic. Here Steve managed to get around Jean-Louis Gassée, a former employee Apple, who at one time left and founded the company Be Inc.who handled the operating system BeOS.

The phenomenon called "Cult of Mac" is a real mystery to many people who consider fans Apple just a sect. Apple love and hate. Moreover, it often happens that this hatred looks much more unpleasant than the fanaticism of any of the fans of the "apples". Many are surprised that the devices Apple are more expensive with weaker characteristics, while forgetting that it's not just gigahertz. Not everyone wants to sit behind a faceless device just because its characteristics are full of beautiful numbers.

In fact, this article is only a tiny overview of the most interesting events that took place in the second half of the 20th century, when an industry was born that was destined to radically change a person’s life. The computer is one of the most ingenious creations of Civilization. And the history of computing is still just beginning. Now it's hard to predict what the future will be Apple, but no one will doubt that the name of this company and the names of its founders are forever inscribed in the history of computer technology.

Steven Paul Jobs passed away on October 5, 2011. The cause of his death was cancer.