Operating system developed in 1990 by Be Inc.. Originally developed exclusively for the computer bebox, designed and manufactured by the same company.

Later, after leaving Be, Inc. from the computer hardware market, BeOS ported first for computers Apple, and later for RS. There have been attempts to adapt it for mobile devices (BeIA). 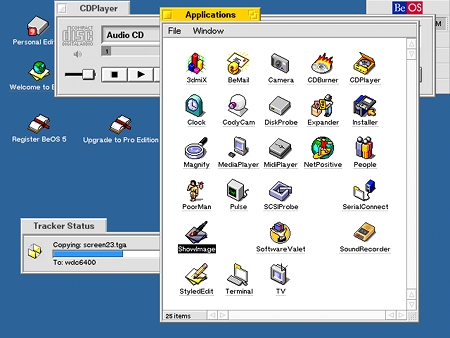 The main features of the system can be considered extremely undemanding to resources, support for multiprocessor systems (which were the same bebox) convenient and beautiful interface, as well as a specially designed 64-bit file system.

The system was not commercially successful, and in 2001 Be, Inc. ceased to exist, having been absorbed by the company palm source.

To date, the rights to the code BeOS owned by a Japanese company ACCESSwho bought in 2007 palm source.

Efforts have been made to revive BeOS. Both on pure enthusiasm, and for commercial purposes. None of them achieved significant results. The most famous projects are HaikuOS, Zeta (project closed) and BeOS Max.