The ever-increasing activity of social network users leads to an increase in online contacts. A thousand, five thousand or more "friends" have become the norm for networks such as Facebook, LiveJournal or Twitter. But the creators of the new social network Path decided to counter this trend with their own. Number of contacts in Path will be limited, the user will be able to communicate with no more than 50 friends.

Creators Path Dave Morin, of Facebook and Apple, and Shawn Fanning, co-founder of Napster, say that too many contacts lead to less legibility when adding to virtual “friends”, and in the end trust is lost, many users do not consider it possible for themselves to share the details of their personal lives on the network, the level of comfort in communication decreases. Path limits the number of possible contacts, only those who are really trusted by the owner of the page will be able to see its contents, which implies greater openness, the ability to share sincere feelings and feelings. Wherein Path is not a competitor to other social networks, rather it is designed to coexist with them in parallel. 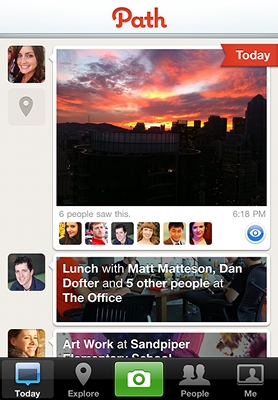 The new network was launched on Monday. While it is available only to owners iPhone и iPod touch and in its first version Path implies the exchange of only photos and pictures, text messages may appear in future versions, but most likely only as a status indicator or extended captions and notes to photos. By capturing moments of their lives and posting these photos online, users will be able to share emotions, feelings, and talk about their lives with a close circle of friends without fear of invading their personal territory.

Founders Path in their discussions, they refer to the work of the Oxford researcher of evolutionary psychology Robin Dunbar, who, based on studies of the work of the brain of primates, determined the approximate number of social connections possible for a person. Dunbar claims that in total we can maintain social contacts with 150 people. Approximately 5 people are those whom we unconditionally trust, our inner circle, about 20 people are close friends, but the boundaries of social networks are determined by the number of 50 contacts. It was on these figures and on their personal common sense that the creators based Path choosing as many possible “friends” as possible.