Recently we already wrote that the company McDonald's plans to return advertising featuring the clown Ronald McDonald. However, it became known that the doctors, who oppose such a decision, did not like it very much.

Non-profit organization CAI (Corporate Accountability International) wrote a letter addressed to the management McDonald'ssigned by more than 500 healthcare workers. The purpose of the letter is to convince them to stop using advertising that promotes frankly unhealthy food among children. Also in the letter, the company is accused of not wanting to provide any research results regarding the impact of its products on human health. 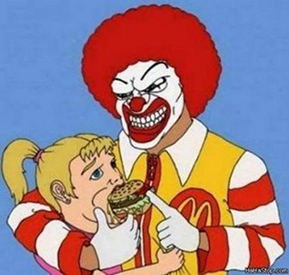 Answer from McDonald's followed immediately. The company does not believe that the proposed harm is harmful. Moreover, he calls it, if not already useful, then at least diverse. Previously, an attempt had already been made to "kill" Ronald, which ended unsuccessfully. However, over McDonald's the clouds are slowly gathering, as the US government has joined the issue of the harmfulness of food. So far, more like an observer, but with a hint that everything will be more serious in the future. By the way, in some states, the regional government is already introducing some restrictions on the sale and advertising of children's complex meals from McDonald's.
Total
0
Shares
Share 0
Tweet 0
Pin it 0