New Year and Christmas holidays are traditionally considered the most successful for many industries. The sale of various electronic gadgets was no exception. It is in November-December that the bulk of purchases are made, which will then be found under the Christmas tree as a gift.

After conducting a survey among children of different ages, analysts tried to find out what Father Frost and Santa Claus would read in letters of requests and wishes. The research concerned the field of consumer electronics. So kids aged 6 to 12 are behaving well all year long and hoping to get their hands on this year's bestseller - iPad from Apple, that was the answer of the 31% respondents. 29%, taking pity on a few parents, are ready to accept another device from the “apple” company as a gift - iPod touch. Another 29% respondents just want a “computer”, without specifying which one. Following in the ranking are various game consoles: Nintendo DS - 25%, PS3 - 21% and others. 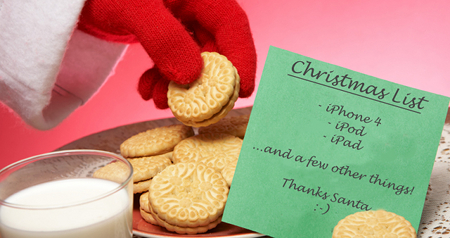 Teenagers over 13 have already figured out what a “computer” is incomprehensible to kids, and most of them want exactly it, but with clear, defined characteristics. Although among older children Apple is a success. 18% teens want to get iPad, which is more than the number of people who want to get any of the game consoles: Wii - 15%, PS3 -13%, Xbox 360 - 9%.

It is assumed that the iPhone 4 and iPad, which appeared on the market this year, will become the most frequent gift among all consumer electronics and for adults as well. Well, Merry Christmas and Happy New Year Apple! Happy weekend!