American manufacturer of computers and laptops. The company's products are characterized by exceptionally high performance and are aimed primarily at gamers and users who need more computing power (for example, for 3D modeling, audio and video processing). Assembly comes from third-party components. Products are distinguished by brutality not only in the technical issue, but also in appearance.

In addition to high performance, computers Alienware are also distinguished by many nuances that make them convenient for gamers. An example is the presence of two standard 3.5 mm headphone jacks in recent laptops. What can I say - the set of ports and interfaces for these models is generally very rich. 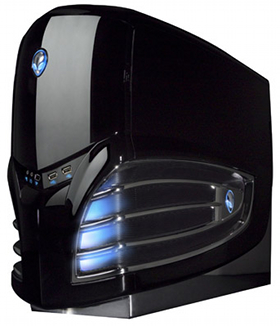 In addition to the computers themselves, various accessories are also produced for them, made in the recognizable style of the company.

The company was founded in 1996. Just at the time when everything was just beginning and gamers looking for mega-powerful computers began to appear everywhere. Alienware was founded by Nelson Gonzalez and Alex Aguila. They gave the name to their offspring, being under the impression of the cult TV series The X-Files (“The X-Files”). The names of the models still contain elements recognizable to fans of the series. Yes, and the logo is typical.

Since March 2002, Alienware owned by the company Dell. The latter already had a brand XPS, under which productive laptops were produced. At first, both brands coexisted. But in 2008 from XPS decided to abandon in favor of a much more famous and respected Alienware.