The company has relied on prices and quality with the motto "Shoes for Live".

The history of the brand, known for leather shoes and related accessories, dates back to 1963. Karl Toosby started his business in the provincial Swedish town of Bredebro. He was not a native of this locality, but for personal reasons he sold a car, a house and other property, and then moved to another region of Denmark, where he organized his own business. His first brainchild was called Eccolet Sko, and a little later it was transformed into the now world-famous ECCO brand.

The company began with a small factory with a minimum number of employees. Success was ensured by following modern trends and hard work. And also the basic principle of Carl Toosby about shoes that are made for feet, but not about feet that are adapted for shoes. It was this strategy that gave the desired result - buyers appreciated the individual approach.

The company began to enter the global shoe market in 1974. Success did not come immediately: it took four years for foreign suppliers and manufacturers to appreciate the three new lines. And they were the first to have the manufacturer's logo embossed on the skin. In the early 80s, sales for the first time in the history of the brand reached the million mark, and imports amounted to 50%.

The subsequent history of the brand is a constant development. New factories were opened every year, foreign subsidiaries appeared, and production expanded. Particular attention was paid to the range of footwear for all age groups, which now included sports models. Over time, other leather accessories began to be produced under the ECCO trademark. 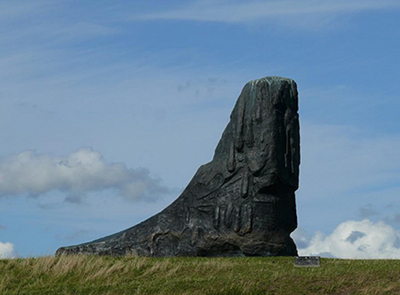 ECCO is one of today's most successful companies with manufacturing facilities all over the place. For the benefit of the brand, factories operate in Asia and Europe, where at least 150,000 employees work. More than 100 countries of the world and 1,000,000 buyers know and buy ECCO shoes. Do you still need proof of success?

Until now, the company remains a business of the Toosby family. Her father and founder, Karl, died in 2004, having lived an interesting and eventful life. So, in 1998 he received the title from Queen Margrethe II and became known as the Knight of Dannebro. Local architect Peter Brandes immortalized this event in a bronze sculpture called "The Foot". The monument was erected in the Danish city of Tönner. And in 1991, the company became the official shoe supplier of the Danish royal court.