One of the most famous and popular brands of Scotch whiskey. It is produced annually in huge quantities (more than 130 million bottles) and is distributed almost all over the world. At the same time, the manufacturer deals with both relatively inexpensive whiskey and premium expensive varieties that are far from accessible to everyone.

The year of birth of the brand can be considered 1819, when a very young Scot John Walker began trading in a grocery store owned by his family. Possessing undoubted talent, John created unique blends of tea that appealed to customers. And a little later, in 1920, he switched to whiskey, also with considerable success. It is this year that is considered to be the date of foundation of the famous brand.

But the Johnnie Walker brand was not created by John himself, but by his son Alexander, who in 1857 took over the management of the family business. In 1967, a new whiskey blend was introduced to customers, called John Walker & Sons, which quickly gained popularity among different segments of the population. 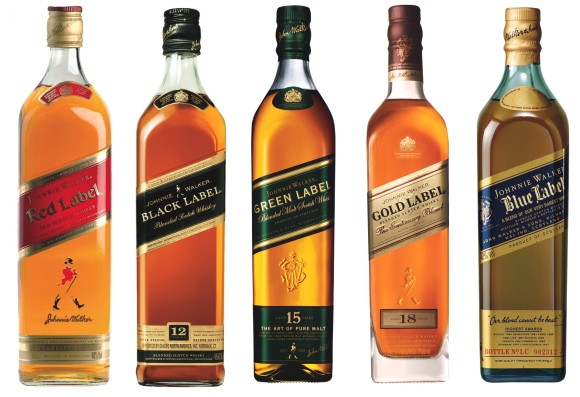 Then Alexander's children joined the business, under whose leadership the company acquired its first distillery in 1893, received all the necessary rights to the Johnnie Walker brand and began a gradual entry into foreign markets.

But the famous logo depicting a walking man appeared in 1908. Its author is the artist Tom Brown, a well-known cartoonist in those years. Since then, the logo has undergone many changes, becoming more stylized and almost universally known.

Today, Johnnie Walker products include several main lines. The most recognizable and well-known is Red Label. This standard and most affordable blend of the company, which includes various varieties, is aged for 3-5 years. The more expensive Black Label line is aged for 12 years. And there are also much more expensive Green Label, Gold Label, Blue Label and some other varieties designed exclusively for true connoisseurs. The cost of one bottle can reach hundreds of dollars.