At the very end of the last century, an American company Fossil presented to the public Fossil Wrist PDA - a clock combined with a PDA running Palm OS. The idea turned out to be a failure, because consumers, although interested in the novelty, did not want to wear a massive device weighing 109 grams on their wrists (almost the same weight as a regular PDA). However, the company did not abandon the idea of "smart" watches, returning to it again. However, this time everything is much easier. 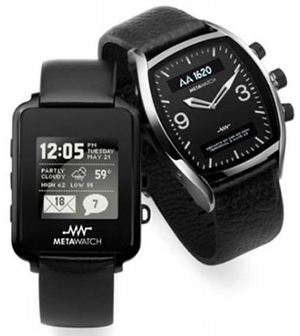 Meta Watch are no longer portable computers. This is just an accessory for a mobile device, communication with which takes place via Bluetooth. The company has already become famous Sony Ericsson. Such watches are able to display various information, such as the number of messages received or the number of an incoming call. However, Fossil declares that Meta Watch will have much better functionality. For example, the device will be designed not only for tracking, but also for control. The watch will be equipped with an accelerometer, vibration, light sensor and others. Fossil hopes to attract developers who will create additional software.

So far, only two watch models are presented - with digital and analog time display. It is expected that their cost will be about 200 US dollars.