Rosetta stone - one of the most effective programs for learning foreign languages. The main principle of learning is a kind of immersion in the language environment, as far as it can be done sitting at the computer. The student is offered several levels of learning, from simple to complex, and the presentation of new words and phrases and the explanation of grammar occurs without the use of the student's native language, only the language that is being studied is present. Understanding the meaning of words and rules comes intuitively, through looking at thematic pictures and considering typical examples. In other words, learning a new language occurs in much the same way as learning a native language in childhood.

The name of the company was chosen in honor of the famous artifact - the Rosetta Stone, the inscriptions engraved on it, made simultaneously in ancient Greek and Egyptian hieroglyphs, made it possible to find a method for deciphering the mysterious Egyptian hieroglyphs. 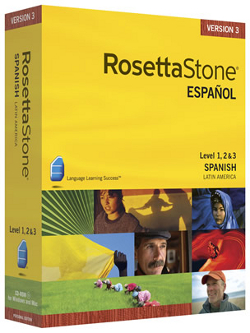 The idea of such a program came to Allen Stoltzfus back in the 80s, but it was not until 1992 that the first steps were taken to implement it, largely due to the emergence of suitable technologies in those years. Allen and his half-brother John Fairfield found the company Fairfield Language Technologies in Harrisonburg, Virginia, the founder's brother, Eugene Stoltzfus, is also joining the cause.

The program is popular and loved by users in more than 150 countries around the world, today customers are offered courses of various difficulties in learning more than 30 languages.