According to Lenta.ru, on advertising posters Coca-Cola, specially dedicated to Euro 2012, the colors of the Ukrainian flag were mixed up. The mistake was found on several posters already posted in Polish cities. 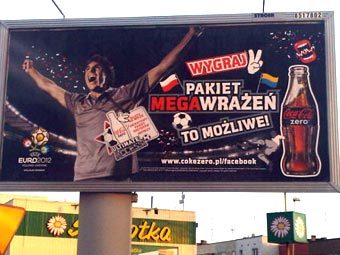 It is not clear how large-scale alterations will be required - the exact number of advertisements already posted is unknown. The “mixed up” posters appeared on February 19 and are now being hastily remade. According to the representative Coca-Cola Poland Services Katarzyna Borucka's “human factor” is to blame for everything.

Coca-Cola is one of the official sponsors of the European Football Championship - Euro 2012, which will be held in Poland and Ukraine. This long-awaited sporting event will begin on June 8th.