Gateway Bronco, originally from Illinois, USA, began production of the classic 1966 Ford Bronco SUV. The release is made under license from Ford Motor Company.

It all started in 1966 when the company Ford Motor Company introduced the Ford Bronco compact SUV, designed to compete with the Jeep CJ-5 and International Harvester Scout. The model turned out to be very interesting, both externally and in terms of the ratio of cost and capabilities. She was in high demand among American buyers belonging to a variety of classes. It was believed that this car looks good both on the farm and on the city street. As a result, the Bronco became one of the legendary American cars.

Subsequently, Ford Motor Company introduced 4 more generations of Bronco, each new model became larger and more powerful, the design changed a lot. The 5th generation, which appeared in 1992, was no longer like the very first classic model. The series ran until 1996. Then it was decided that the car no longer meets the needs of modern buyers and its release was curtailed. Its successor was the Ford Expedition. 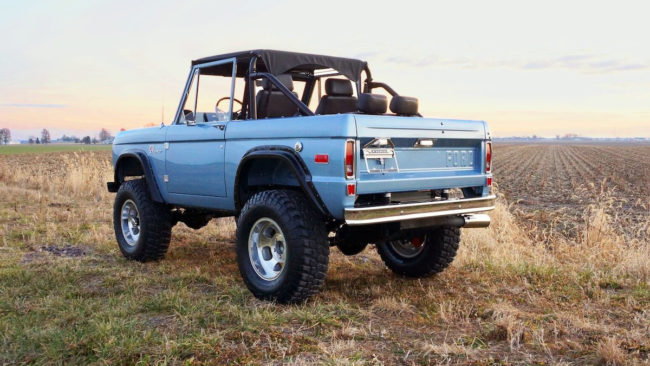 However, in early 2018, Ford Motor Company announced work on a new generation of Bronco. What it will be is still unknown, but from the image of a car covered with a tarpaulin that appeared on the network, it can be assumed that the company is returning to its roots. That is, the new car will be small and angular.

Well, those who wish to touch the legend can purchase an almost exact copy of the same Bronco from 1966 from Gateway Bronco. This pleasure is not cheap - depending on the modification, the cost of a car is 120, 150 and 180 thousand dollars. Modifications differ in technical characteristics and have some differences in appearance. The buyer can purchase a fully restored model, a model with a new body on an old chassis and assembled from scratch.