The history of this legendary automaker began back in 1903, when Henry Ford founded a small company with eleven partners. Ford Motor Company. The starting capital was $28,000, which was raised thanks to various investors. Ford already had a wealth of experience in engineering, racing and business. True, his first company Detroit Automobile (1899-1900) went bankrupt, having managed, however, before that to release several racing monsters, which simply had no equal on the tracks of those years.

The negative experience of selling fabulously expensive cars was not in vain - Ford has now decided to start producing cars that would be available to the average consumer. The first product was the Ford A model, a small "gasoline sidecar". And in 1908, the legendary Ford T was born, which was destined to "put all of America behind the wheel." The car was initially quite affordable, and after the introduction in 1913 at factories Ford Motor Company conveyor assembly, has become even cheaper. In Europe, the First World War rumbled with might and main, and in the USA, another Ford T model left the factory gates every ten seconds. The concept of “Ford conveyor” will become a household word, a symbol of monotonous and almost slave labor (especially in the USSR).

Ford T quickly becomes a real legend. The people dubbed him "Tin Lizzy" ("Tin Lizzy"). The car was produced in a wide variety of body modifications (their number was not just large, but huge - the car was adapted literally for everything from a pleasure roadster and a two-door sedan to a tow truck and a cattle carrier). Ford T was as simple as possible and, as a result, very reliable. A joke went around the country, about how a certain owner of this car repaired his junk miracle by buying a variety of junk from a junk dealer. By the way, Ford understood perfectly well how important it was to provide consumers with spare parts and paid a lot of attention to this issue, which once again had a positive effect on the popularity of the T model. "Tin Lizzie" was produced until 1927.

In addition to the legendary “T”, other models rolled off the assembly lines, many of which served as role models for other companies. So it was Ford cars that formed the basis of the products that he began to produce. GAS. 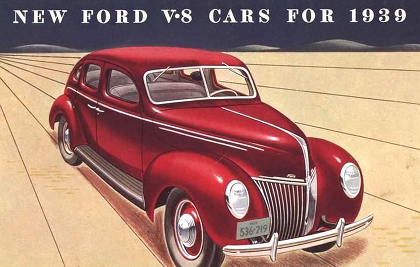 The Second World War brought with it military orders. The production of civilian cars was stopped, all production facilities were put into production of military equipment, including tanks and aircraft. Henry Ford was not considered a trustworthy citizen, having managed to earn a lot of unflattering characteristics. He openly expressed his pro-Nazi views, was a staunch anti-Semite and a member of the Ku Klux Klan. However, he was also the owner of the largest factories in the country, so the military turned a blind eye to his past. However, in 1946, Ford will still be awarded prestigious awards for services to industry and the country. It happened just before the death of the founder Ford Motor Company, which overtook him in 1947, after which the management of the company passed into the hands of Henry Ford II - the grandson of Henry Ford.

Ford's death did not affect the development of the company in any way. She continued to develop at an accelerated pace, turning into a truly respected and even legendary. One after another, models appear that in the very first years of production become very popular, real bestsellers, experiencing reincarnations, one after another (a classic example is Mustang). For many Americans (and not only for them) Ford has become synonymous with the concept of "great car".

Headquarters Ford Motor Companyis located near Detroit, in Dearborn, Michigan, USA (Dearborn, Michigan, USA). The company is one of the three largest car manufacturers in the world. The widest range of products is produced - cars of different sizes, purposes and costs. Much attention is paid to various types of racing. Representative offices and factories of the company are scattered around the world.

In 1958 Ford Motor Company produced cars under the brand Edsel. It was an attempt to offer the buyer a prestigious, but fairly affordable car. The attempt is extremely unsuccessful - in 1960, production Edselthat enjoyed extremely little demand was curtailed. Ford lost millions of dollars on it, and Edsel became synonymous with failure.

In 1986, an English brand was acquired Aston Martin Lagonda. The purchase was not very successful and in 2007 they got rid of it by selling it to a consortium of investors, led by the company Prodrive.

Also unsuccessful was the purchase in 1990 Jaguar and in 2000 Land Rover. They went to the Indian Tata Motors in 2008.

Things did not go too well in the case of Volvo Cars, acquired in 1999 and sold in 2010 by the Chinese Zhejiang Geely Holding Group.

From the brand founded in 1939 Mercury, under which cars of the middle price category were produced, it was also decided to refuse. The brand ceased to exist in 2010.

The brand has existed for several years. Merkur - from 1985 to 1989. It was sold mainly in the US and Canada, although a few models still reached Europe.

But with the brand Lincolnwhat belongs Ford Motor Company since 1922, so far so good. Under it, luxury cars "not for everyone" are still being produced.

Although the company had a logo from the very first days of its foundation, it became mandatory to install it on cars only in 1976. Before that, it was already clear to everyone that this Ford. In a crowded car market, this is no longer so obvious.

Pulling is easier than pushing - this ancient truth was well understood by many Ford T owners. The fact is that the car's engine was rather weak and could hardly overcome too steep climbs. In such cases, it was necessary to turn around and drive backwards.

Yes, there were a variety of modifications to the body of the Ford T. However, all the models produced had one thing in common - they were all black. On an incomprehensible whim, Henry Ford believed that "a car can be any color, as long as it is black." For this reason, the Model T was often compared to an old maid in a black dress and bonnet.