Swiss watches are invariably associated with good quality. Moreover, for a long time not everyone could afford them, and therefore these watches remained the prerogative of only representatives of a certain class. At least, that was until 1983, when Swatch watches appeared on the market. Literally in the first couple of years, they managed to turn the watchmaking industry on its head.

The author of the amazing accessory was Nicholas Hayek, who offered people Swiss quality for affordable money. It all started with the fact that the Swiss watch industry in the 80s of the last century was overtaken by a severe crisis. The cause of the crisis was the vigorous activity of Japanese concerns, which mass-produced cheap quartz watches, thereby ousting such giants of the watch industry as ASUAG and SSIH, the owners of the well-known brands Omega, Tissot, Longiness and others, from the market.

As a result, Swiss companies were on the brink of extinction and urgent action was needed to remedy the situation. It was then that entrepreneur Nicholas Hayek got down to business, who bought the shares of ASUAG and SSIH from Swiss creditor banks, in order to then create a new company on their basis - SMH (Swiss Corporation for Microelectronics and Watchmaking Industries Ltd.). 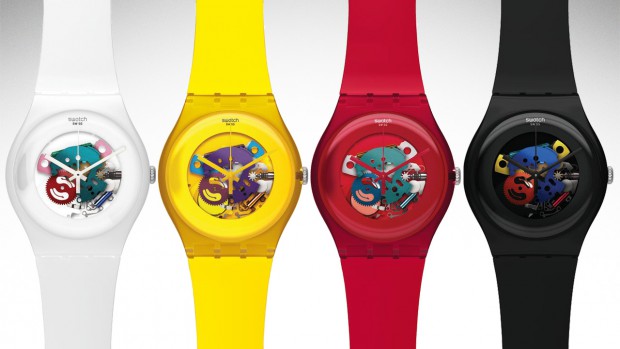 The goal of Nicholas Hayek was to give a fitting rebuff to the Japanese concerns. He had to create a product that was both high quality and inexpensive. Thus began a long period of development, at the end of which the world saw the world's first thin quartz watch. Their movement consisted of only 51 parts instead of the usual 91 and was enclosed in modest plastic, which ensured a low price.

However, a low price alone, even with Swiss quality, was not enough to win back the necessary market share from the Japanese. A corresponding idea was also required. Then the concept of a "second" watch came to Hayek's head.

The newly created wrist watch was positioned as a fun accessory that can be changed depending on the weather, mood, style of clothing. That's why their design has moved away from strict and discreet motifs, preferring more cheerful colors. The idea of a second (spare) watch (“second watch”) turned out to be so successful that it even formed the basis for the name of a new product - Swatch.

Nicolas Hayek's strategy brought results very quickly - during the first year alone, more than a million Swatch watches were sold by the company's fans. According to the results of the next year, the result was exceeded by another 2.5 times. The Swiss defeated the Japanese in this fight. And Swatch watches began to confidently gain popularity around the world.

At the same time, the entrepreneur did not forget about other brands of Swiss watches. Nicolas Hayek used the proceeds from the sale of his unusual accessory to restore such classic Swiss watch brands as Omega, Tissot, Breguet and others. The Léon Hatot brand, which specialized in the production of women's jewelry watches of the highest category, was also brought back to life. Therefore, today we can safely say that the watch industry in Switzerland owes its existence to the small plastic watch Swatch.

However, not all was rosy in the world of Swatch during their twenty years of existence. Once they also had to go through a rather difficult period. And the reason for the hard times was the emergence and rapid popularization of mobile phones. Having been able to check the time on the displays of their gadgets, people no longer felt the need for a wristwatch.

In order to prevent the situation from completely getting out of control, Nicholas Hayek decided to emphasize the fashion component of the watches produced by the company as much as possible. They began to pay even more attention to their design, as a result of which the watch finally turned into a fashion accessory. People could read the time from the screens of their mobile phones, but they still wore Swatch watches on their wrists.

To develop the design of the products of this brand, a special design studio was created, which is located in Italy. It was there that the design ideas for all those watches that are familiar to us today were born. Recently, the Plastic Originals series has been the most popular and affordable. Despite its simplicity, these colorful watches are easily recognizable. Men of all ages today prefer the Irony series. The Flik Flak brand, which first introduced its wonderful children's watches to the world in 1987, became the leader in sales among children's watches.

Today, Swatch regularly updates its range. Stably twice a year the company releases new collections of watches, thereby once again emphasizing its belonging to the fashion world. Periodically, special series of watches are also released, the design of which was contributed by Yoko Ono, Daniel Swarovski, Christian Lacroix, Robert Altman and Pedro Almodovar.

Over the twenty years of its existence, the Swatch Group (SMH was renamed into it) has created many different collections of wristwatches. Among them are classic models, and fashion watches, and representatives of a sports orientation. The main reason for the success of Swatch was that the company was always in search of new current trends, guessing the possible wishes of its customers. And it is unlikely that she will change her chosen direction tomorrow, remaining a creative locomotive of the European watch industry.