Celine is a famous French fashion house. Part of the holding LVMH, whose focus is on the production of luxury goods.

The company was founded in 1945 and was originally engaged in the sale of children's shoes. But the shoe store began to grow into something more and soon, during the fifties, under the brand name Celine various accessories began to be produced, mainly from leather, as well as perfumes. The name of the brand comes from the name of the founder - Céline Vipiana. 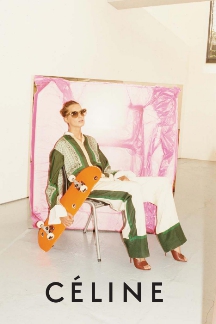 In the sixties, the range of the brand is already very close to the modern one - Celine becomes a clothing and accessories brand for women. In 1996, the brand was acquired by the "luxury" holding LVMH.

creative director Celine is British designer Phoebe Philo, who previously worked with the fashion house Chloe (before her, this post was held by Roberto Menichetti, Ivana Omazic and Michael Kors). Under the name Celine produces a wide variety of clothing and accessories for modern women. The company's central studio, previously located in Paris, is now located in London, having moved there after the British designer.