Group owned brand Unilever, under which soap and other cosmetic products for skin and hair care are produced. Appeared in 1956, when a unique formula of soap devoid of alkali was created. This approach avoided dryness and irritation, which could appear in the case of using ordinary soap. Initially, the novelty was developed exclusively for the military, whose skin was badly damaged as a result of burns, as a result of which the use of conventional cosmetics became undesirable, if not impossible. However, over time, realizing the full potential of the new soap, the company's specialists decided to make it a product "for everyone." The decision turned out to be the right one - the brand quickly became popular, and many consumers liked the soap.

It is believed that the symbolism of the brand is a flying dove (dove, translated from English, means "pigeon") - symbolizes the dove of peace. After all, the products originally produced under it were intended for soldiers who suffered in the fighting. The appearance and colors of the logo may vary. 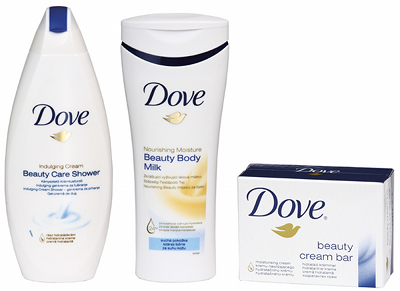 Long time product selection Dove was small - only cream soap. However, since 1995, the assortment began to expand. First, shower gel cream was introduced, and then, gradually, other cosmetic accessories. They are united (in addition to the brand) by a composition based on the same formula developed in the second half of the 50s of the last century, but still not outdated. In 1996, the first products appear Dovedesigned specifically for children.

To date, the brand Dove considered one of the leaders in its field. It is known to millions of people in almost a hundred countries around the world. Turnovers have long ago exceeded 2.5 billion dollars, of which more than a billion are in the US market.

In the composition of all products manufactured under the brand Dove includes animal fats. For this reason, they are avoided by staunch vegetarians.

Dissatisfied Dove and "green". After all, coconut oil is actively used in the production of cosmetics. Huge plantations are created for its production, for which significant areas of Indonesian forests are cut down. However, many companies can be found on the “list of accused”. for example Nestle, which even stated in May 2010, which is phasing out palm oil from that region.

Held in 2004 Unilever study (called "Real Truth About Beauty" – "The Truth About Beauty") showed that only 12% women were satisfied with their appearance. There are very few who consider themselves really beautiful - only 2%. Having assessed the depth of the problem of such low self-esteem, which arose as a result of stereotypes imposed by the media, Univeler launched an original advertising company Campaign for Real Beauty ("Campaign for Real Beauty"), the purpose of which was to show the inconsistency of the legend about modern standards of beauty. Promotional video titled evolution, won a huge number of prestigious awards, including Cannes Lions International Advertising Festival (International Cannes Advertising Festival). As part of Campaign for Real Beauty, in the same year, 2004, a fund was created to combat complexes in relation to appearance - Dove Self-Esteem Fund (DSEF). There are statistics according to which by 2010 the foundation allowed at least five million women from all over the world to get rid of complexes.