Hong Kong international air carrier operating flights to many destinations in the Asia-Pacific region. It is a subsidiary of the major carrier Cathay Pacific, also from Hong Kong.

Dragonair (full name - Hong Kong Dragon Airlines Limited) began operations in 1985 as a subsidiary of the Hong Kong Macau International Investment Co. It was founded by businessman Chao Kuang Pu (Chao Kuang Piu), who later became a member of its board of directors. At first, the young airline operated flights only between Hong Kong and Malaysia. Over time, the number of destinations has increased significantly (reaching 33 by the end of 2012).

Initially, the airline's fleet consisted of Boeing aircraft. Subsequently, it was supplemented by Lockheed and McDonnell Douglas. To date, Dragonair uses Airbus exclusively.

From the very first days of its existence, Dragonair has become a competitor for one of the largest in the region and firmly standing on its feet Cathay Pacific. The competition was all the more difficult because the post of Hong Kong finance minister was held by Sir John Bembridge, who once served as CEO of Cathay Pacific. Thus, the development of the young company also met with active opposition from the government. She was hindered in the acquisition of new aircraft, the opening of new routes. It was a very difficult period in its history.

In the early 1990s, 89% of Dragonair's shares were bought out by a consortium that included Cathay Pacific, Swire Group and CITIC Pacific. Later, China National Aviation Corporation also joined the shareholders. In the mid-90s, the first Airbus appeared in the company's fleet. And by the end of the decade, Dragonair's shares were listed on the Hong Kong Stock Exchange for the first time. 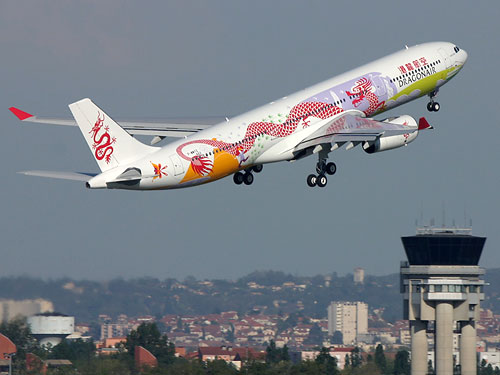 The beginning of the 21st century was marked by the fact that Dragonair was completely taken over by the former main competitor, the carrier Cathay Pacific. It happened on September 26, 2006. The new owners decided to keep the brand and structure of the acquired company. Changes in personnel were relatively small, with all laid-off employees (there were less than 5%) offered a job in Cathay Pacific itself.

Initially, all Dragonair aircraft were distinguished by a wide red stripe along the fuselage and an all-red tail. Today they are completely white, along the side there is a recognizable image of a flying dragon (and sometimes just the inscription “Dragonair”). It is also drawn on the vertical stabilizer of the aircraft.