Market capitalization HTC surpassed that of Nokia - 33.8 billion dollars, against 32.84 billion. For a Taiwanese company, which a few years ago was generally unknown to anyone, this is a very serious achievement.

Serious attempts to independently enter the market HTC, which until then had dealt exclusively with OEM assembly, began in 2004 when the brand was created Qtek. In 2006, they abandoned it, starting to assemble products under their own brand.

The appearance of the operating system played a special role in the development of the company. Google Android (previously used Windows Mobile), thanks to which the ascent to the top began. In the last year alone, smartphone sales NTS rose by 72%. 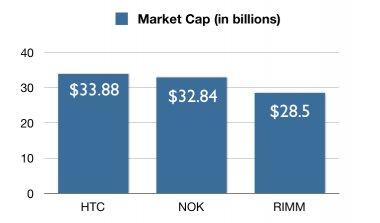 At the same time, the Taiwanese manufacturer managed to outperform not only Nokia, but also R.I.M. (28.5 billion), brand owner blackberry. And it is likely that this trend will continue.

Of course, in terms of sales Nokia is still the leader. But this is achieved exclusively through budget models. Devices from HTC are expensive and rarely sold. However, some retailers note that they receive similar revenues from the sale of devices from these companies.